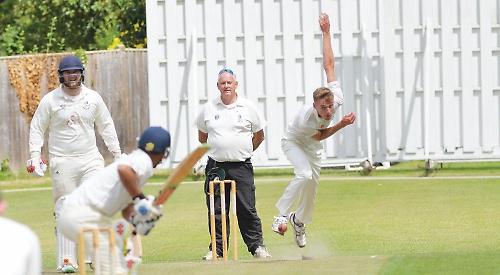 HENLEY failed to extend their lead at the top of the Home Counties Premier League Division 1 table after a disappointing draw at home to a gutsy HORSPATH side last Saturday.

For a time Henley looked well set to chase Horspath’s first innings total down. However, when Matt Rowe was forced to retire hurt having fractured his hand during a powerful partnership with Waqas Hussain, with the exception of Euan Woods, the middle to lower lacked composure, with no one willing to grab the game by the scruff of the neck when it was required.

The result leaves Henley still top of the table, but with only 21 points covering the top six teams there is everything to play for as the halfway mark of the season approaches.

In contrast to previous weeks, with some extensive cloud cover and some light rain in the air, Saturday morning was a stereotypical ‘bowl-first’ morning. It was unsurprising when Henley skipper Roberts won the toss and elected to field, a decision which appeared justified early on, with both Nugent and Afridi looking ominous from the outset.

Nugent’s apparent threat finally came to fruition in the ninth over, having Mohammad caught smartly by Barnes at third slip, before striking again in the 11th over, with Fitzjohn gloving a peach of a delivery to the diving Davison.

Two early wickets did little to quench Henley’s thirst for wickets and some brief resistance came to an end in Nugent’s 10th over after Jefferson impatiently drove at and nicked a length ball through to Davison.

With the score on 39-3 after 20 overs, Henley looked set to repeat their demolition of Oxford only a few weeks prior. However, Cosford joined the watchful Coleman and together, they began to rebuild the Horspath innings, taking the visitors to 83-3 at lunch.

After lunch both Coleman and Cosford went on the attack against Henley’s spinners, who struggled to build pressure, bowling one too many boundary balls an over. In hindsight, Henley’s skipper may well wish he had persevered with the seam for a little longer, or at least switched back to seam sooner, with the Henley track offering little assistance to the spinners.

When Nugent and Afridi did come back into the attack, the scoring rate dramatically slowed despite Coleman and Cosford reaching centuries. The latter’s was one to be remembered, exemplifying how to go through the gears having rebuilt the innings. When Cosford did finally depart, it was expected that Horspath would go on the attack to try and get as big a total as possible. However, and much to the home side’s surprise, centurion Coleman and new man Shahzad proceeded to knock the ball around at less than a run-a-ball, meaning Horspath finished on a respectable but ultimately below-par 268-4 off their allotted 64 overs. After Horspath’s impressive recovery in the middle overs, Henley’s much vaunted batting line-up would have taken this total on what was now a belting wicket paired with a lightning fast outfield.

After the first half a dozen overs, it looked to be a matter of when, not if, Henley would get over the line. Roberts and Rowe started assuredly, wisely taking the shine off the new ball, before the former mistimed a normally trademark pull-shot off former England fast-bowler Shahzad to be smartly held at mid-on.

Hussain strode to the wicket and proceeded to counter-attack with panache and in partnership with Rowe, took Henley past the 50 mark and in a blink of an eye, passing the 100 mark in the 24th over. Then, just as Henley were beginning to get a real march on, Rowe was struck on the hand by a well-directed short ball from Shahzad. Rowe knew he was in trouble and walked off the ground almost immediately, with later X-rays revealing a badly broken metacarpus which will keep the Cornishman out of action for around six weeks.

This unfortunate turn of events was just the piece of luck Horspath required, pouncing on this opportunity before the Henley batsmen could rebuild, demonstrating just how quickly momentum can shift in sport.

Not long after, Hussain was caught at deep-square off Shahzad for 85 off 82 balls, before dangerman Morris repeated the dismissal of his captain, mistiming a pull-shot to be caught at mid-on.

Youth and experience then combined to put together a partnership which looked to put Henley back on track, as Woods and Barnes rotated the strike smartly whilst also putting anything loose to the fence.

Just as Henley passed the 200 mark, Barnes was caught at midwicket off Cosford, playing loosely in search of a single, epitomising Henley’s general batting display as one of carelessness.

Woods would remain resolute at the crease for the remainder of the innings, with wickets falling in quick succession at the other end. Davison was the first to go, caught at mid-off favouring touch over brute force, with the latter method certainly more suited to Henley’s powerful and capable keeper. Ashraf was then caught at midwicket trying to hit the ball into the stratosphere, before Brock was expertly caught at cover.

When Afridi then ran himself out coming back for a second, it was left to Nugent and Woods to steer Henley towards a below par draw, a result which will have felt like a win for the away-side and a defeat for the hosts.