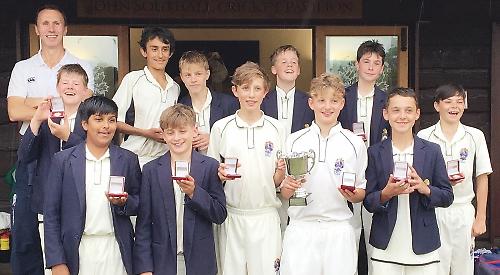 SONNING-BASED Reading Blue Coat School has two Berkshire County Cricket Cup champions following wins for both their U12 and U13 teams.

The U12s secured their county cup with a win agaisnst Crosfields, who they defeated by seven wickets, with 14.2 overs to spare.

The opening bowling partnership of Ed Philpott and Josh Benton set the tone with good accuracy and control. Philpott bowled the Crosfields opener with his third delivery, with the other opener suffering the same fate from Benton a few overs later.

Crosfields had accrued only eight runs after the first six overs with the loss of two wickets. A change of bowlers brought little respite as Max Head removed their number three with an inswinger in his first over. Some quick thinking by Dan Harris effected a run out of their number four.

Head claimed a second wicket in his next over, before a productive partnership halted any further losses. This was until the introduction of left-arm spinner Tom Aston, who bowled both batsmen within two overs. Aston picked up another wicket thanks to a reaction catch behind the timbers by Harris. Luca Knowles and Joe Smart finished off the tail to bring the Crosfields innings to end on 70 all out, with six overs to spare. James Newton and Dan Harris put on a partnership of 30 before Harris played across the line to a straight one from Crosfields’ Ahan, departing for 12. James Newton was lbw for 7 to a full toss from the same bowler in his next over. Archie Macpherson picked up two boundaries with some well-timed drives, before skying one and being caught for 9. Joe Smart and Josh Benton finished the job with some powerful hitting combined with some good running between the wickets. Meanwhile Blue Coat U13s produced a clinical performance to beat Claires Court by 59 runs.

Blue Coat batted first and got off to a good start with Harry Martin (63) and Nick Vye (17) putting on 79 for the first wicket.

In the field Blue Coat produced some good bowling and fielding. Krishal Maru and Jake Bains-Gillespie (3-14 in five overs) bowled with discipline. Felix Johnston then produced a match-winning performance, taking 5-13 in five overs while Tom Dexter also bowled well at a difficult time of the innings. The bowlers were backed up by some good fielding, Henry Waghorn and Matt Donovan pulled off some diving stops on the boundary while Harry West took two vital catches.

Harry Martin kept his cool for a run out and Jamie Seddon produced a good piece of fielding, pulling off a diving stop, getting to his feet quickly and an arrow like throw caused a run out.