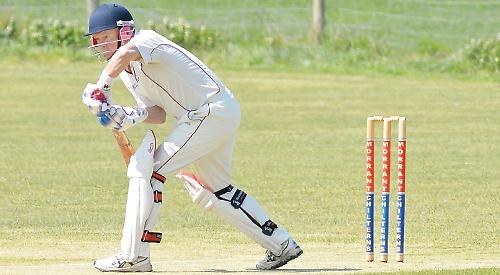 HURLEY came out on top in an exciting clash against SONNING at Shepherds Lane on Sunday.

On winning the toss Sonning skipper Bill Travers opted to bowl first. The Hurley opening partnership of Mike Walton and James Calliss could only manage four runs before Calliss fished outside his off stump giving Fitton a simple catch off Finlay Griffith.

Yasir Gul joined Walton in a partnership of 35 for the second wicket, broken by Sunny Singh when Gul slapped a wide delivery to Longridge at mid-off. Three balls later Matt Hampton became Singh’s second victim, mistiming a drive to extra cover. With Singh’s suspect action drawing the attention of the umpires, he was withdrawn from the attack to be replaced by Sag Dave who together with Beniwal kept a lid on the run rate.

Henry Graham played in his usual free-hitting style to make 24 out of a partnership of 36 for the fourth wicket. With Walton suffering from a calf muscle strain, he was run out when his runner, Henry Graham, called a quick single and failed to beat the direct hit at the striker’s end.

Kuldeep Nothey took the score to 164 before Griffith was reintroduced and finished the innings, bowling Paul McDermott and Dave Walton with consecutive deliveries.

The first ball of the Sonning reply also produced a wicket as Travers failed to pick up a full toss from Ross Brown which clattered into the top of the left hander’s off stump.

With Walton unable to take his usual position behind the stumps, Matt Hampton deputised and did a creditable job. Brown’s second wicket came courtesy of a spectacular catch at slip by the injured Walton, reaching high to his right to parry the ball and then tumbling forward to grasp the rebound to send McLoughlin back at 31-2.

With Dave Walton unable to find any sort of rhythm he was replaced by Joe Graham whose four overs cost only three runs for the wicket of Sunny Singh.

In the end pressure told as Singh went for one cross shot heave too many and lost his middle stump to McDermott. The introduction of Henry Graham proved crucial, as his pace troubled the lower order. After struggling to find a line he set up Dave with a short ball followed by a Yorker.

His next over saw the back of Longridge. With Brown returning to bowl Griffith the match was in the balance with Sonning requiring 29 more runs from six overs with two wickets in hand. An inspired piece of captaincy saw Mo Basharat replace Graham and dismiss Naqi with his first delivery as the batsman lofted down the ground to Nothey leaving 10 runs required as last man Michael Longridge strode to the crease.

A single from Beniwal left the youngster to block out the remainder of the over, which he did with ease. With three overs left all results were still possible but it was the hosts who prevailed as Beniwal drove Brown to Basharat at mid-on giving Hurley victory by eight runs with 17 balls to spare.