Shafqat takes hat-trick to leave hosts in a spin 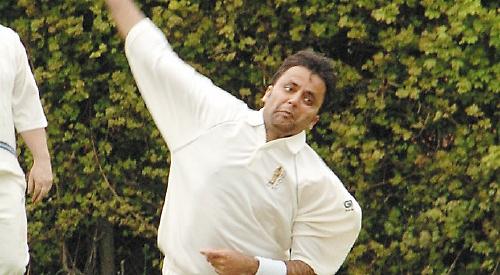 MOHAMMED Shafqat picked up a hat-trick in his five-wicket haul as GREYS GREEN ran out winners at MORETON in a 30 overs match played out on a very dry wicket.

With Moreton’s short boundaries and a fast outfield the visitors knew they needed to bowl well to restrict the home side to a reachable total.

The visitors got off to a good start with Shafqat removing Hessey in his first over for 0. McGregor and T McDonald then put in a quick fire 20, latching on to anything wide or short and looked destined to push the home team total on at pace. However, a mistimed drive from McGregor was pouched by Cross at mid-off giving Shafqat his second wicket of the day.

Lambert’s run out of Reilly with a direct throw from 40 yards was the highlight in the field and seemed to trigger a home team batting collapse. Despite their best efforts Moreton’s free scoring was restricted due to wickets falling at regular intervals, this culminated in a Shafqat hat-trick, his first for Greys Green.

The home team were soon teetering on a score well below par but the final wicket partnership between Ramachandra and Marriott defied the visitors and almost doubled the home team’s score before Marriott was caught by Cusden in the covers off Lubbock. A total of 146 all out now looked a better score than had previously been expected by the home team.

Greys Green started their reply in a cautious manner with Shafqat and Ahmed finding it difficult to score from a tight bowling and fielding performance.

At the half way point Greys Green still needed 100 from 15 overs but had the advantage of both openers now being well set. Ahmed and Shafqat took the attack to the home side scoring freely with both striking regular boundaries. The visitors reached their total in the 26th over without the loss of any wickets with both openers reaching half centuries.