Sheldon takes stumping to send side top of the table 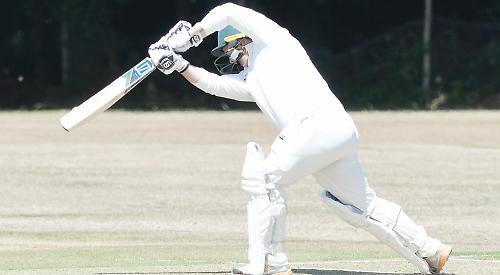 HENLEY 2nds remain in the Division 1 relegation zone after going down to an eight-wicket defeat away to league leaders WOKINGHAM last Saturday.

Batting first Henley put on 193-9 off their allotted 52 overs with Michael Williams top scoring with 78 and useful contributions from Cameron Jacobsen (44) and Will Legg (30).

In reply the league leaders reached their target in 37.4 overs with former Oratory School student Dan Housego top scoring with 89 not out as the hosts posted 194-2.

KIDMORE END moved to the top of Division 2A with a 154-run win at home to HAREFIELD.

The hosts won the toss and batted first on a hot afternoon. Containing a buoyant Kidmore batting line-up was always going to be tough for bottom-of-the-league Harefield, especially with the outfield being yellow and fast.

Despite a fast start, 25 runs from the first three overs Kidmore did lose an early wicket. Jake Leach batted well with his mentor Jeff Sheldon and the pair put on 75 runs for the second wicket. Leach drove and pulled well, whilst Jeff Sheldon deftly used the pace of the ball to score frequently behind the wicket.

At the 17 over mark Kidmore were in a dominant position, but there was a flurry of wickets as Leach, Ashby and Sheldon fell within four overs of each other.

Fountain and Grant batted patiently and rebuilt after this minor collapse and added 58 together before Fountain was out for 25. Going into the last 15 overs of the innings Kidmore End were on 175 and needed to accelerate as the lover middle order all chipped in with boundary scoring shots before Grant was dismissed for 40.

Antony Holland, batting at seven scored 42 from 39 balls, and was run out in the last over of the innings. Frost and Taylor contributed a couple of boundaries, but the real acceleration and excitement came from Umer Faroqi. In a brutal display of savage striking he deposited the opening fast bowler from Harefield for three consecutive sixes. Finn Russell batted for three overs at the end as Kidmore End finished 278 all out.

Kidmore End started the second innings with the old ball, and in a controversial fashion started with Ashby from an unfamiliar end, in order to give the wrist spin bowling of Faroqi the best chance of success, by bowling him from the wood end because it would help with his leg break.

Initially both bowlers struggled with this change, but once they settled into a rhythm pressure started to grow, and although boundaries were struck by the Harefield openers, they were often in desperation for the batsmen were playing and missing in between these moments of fortune.

The first wicket fell to Ashby after a top edge went to Frost at first slip. Faroqi then struck quickly with a good piece of deceptive bowling which forced the opener into popping up a caught and bowled.

Faroqi then strutted in to bowl and made the ball fizz. Batsmen did not know what to play and what to leave and this scrambled their thinking. Ashby had another caught smartly by Tom Sheldon at the wicket, Russell took a catch at mid-on after Faroqi’s delivery mesmerised another batsman into a rash shot and suddenly Harefield had lost four wickets for 30 runs.

Calem Taylor had a bowl after the first drinks break and the batsmen started to block for survival. Despite beginning to tire in a long spell of 14 overs Faroqi claimed two more wickets, one caught by Tom Sheldon and another caught by Taylor.

A small stand then developed between Summerfield and O’Hara but it was not the runs being scored that were the issue for Kidmore End but the overs being eaten up.

Frost brought himself on to bowl, initially with the old ball, but after getting fed up with the lack of bounce he did not require much persuasion to take the new ball. This had an immediate impact. He took three wickets in three overs, one caught by a onehanded catch by Faroqi, one by Grant at second slip after the batsman top edged a short ball, and one bowled by an outswinger.

Harefield lost three wickets with the score on 116. Ashby and Tom Sheldon combined to take the last wicket, thanks to a fast legside stumping in the 39th over as Kidmore won in emphatic fashion with nine overs to spare.

Division 3A league leaders WARGRAVE ran out three-wicket winners at home to FLEET.

Batting first the hosts were bowled out for 190 with Jack Clark taking 4-32 and Neal Robinson 3-56. In reply Wargrave reached 192-7 to wrap up the match with Luke Taylor top scoring with 76.

Nathan Hopkins took seven wickets as HENLEY 3rds moved up to third in Division 5B as they defeated MAIDENHEAD AND BRAY 2nds by five wickets at Nettlebed.

Losing the toss Henley took to the field in what has been their preferred approach in the first half of the season.

Harris-White opened up well and saw edges dropping agonisingly short of the slip cordon. Chappell provided control at the other end, with the Maidenhead opening batsmen trying to push the score early on. Chappell claimed two wickets, caught at mid-off with King going for a big off-drive and a short ball pulled straight down the throat of Harris-White at square leg.

Neville also tried his luck with some seam bowling but despite bowling well Maidenhead were still adding runs at a fair rate with a quick and dry outfield. It was the inclusion of Sean Taylor and captain Hopkins that changed the game in favour of Henley.

Taylor, bowling 18 overs in a row, limited runs at one end. With his mix of cutters and slower balls Maidenhead could not get his bowling away for meaningful runs. Hopkins with his off spin on a receptive pitch kept the steady flow of wickets coming. His first was an lbw darting into the pads.

Two wickets in two balls followed. A loose short ball lit up the eyes of the batsman and Tom Jordan on the boundary made a difficult catch look easy. Next ball it was a low full toss spooned up and caught at cover.

Hopkins kept taking wickets with two taking out the stumps. Hopkins mopped up the tail, collecting a highly impressive 7-48 from his 14.2 overs, with Taylor adding one wicket for his resilient effort. Maidenhead and Bray set Henley 189 to win.

Taking the old ball first up was a risk that did not pay off for the opposition, the Maidenhead spinner not getting as much turn as Hopkins, it let Matt Dalrymple and Andrew Hester settle into their batting and set Henley on the way.

Dalrymple ended up on 49, going for a big shot to bring up his 50 he was bowled. Hopkins at three took on the bowling and some quick runs followed, it made Maidenhead take the new ball.

Hopkins and Hester fell and Maidenhead had their tails up but Paul Smith took away any hope of victory out of sight. His approach stemmed the flow of wickets yet kept the scoreboard ticking over, creating a vital partnership with Manoharan. The test of the new ball quickly faded and Henley went about their ways to pick up a vital victory, an impressive run chase with Henley never in any danger of losing the game.

At the other end of the table WARGRAVE 2nds moved into the relegation zone as they suffered a 79 run defeat against ALDERSHOT 2nds.

KIDMORE END 2nds slipped to third place after going down to a seven wicket defeat at FLEET 2nds.

The visitors, batting first, were bowled out for 218 before the hosts knocked off 219-3 in reply to secure victory.

In Division 9A KIDMORE END 3rds lost out by 18 runs against EVERSLEY 4ths.

Batting first Eversley were bowled out for 122 with Kidmore End replying with 104 all out.

Elsewhere in the division WARGRAVE 3rds lost to WOKINGHAM 5ths by 17 runs.