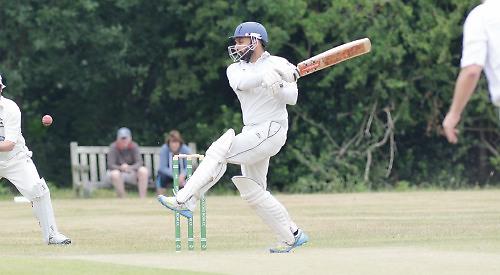 PEPPARD STOKE ROW recorded a second-straight 10-wicket win as they hammered WOODLEY in the Premier Division on Saturday.

The hosts elected to bat on a decent surface, but with the ball swinging lavishly, they collapsed in the face of some fabulous swing and seam bowling from Matt Hopper and Alfie Clifton.

Moubeen Shaukat was the first to go, flicking Hopper to Paddy Hennessy at short mid wicket, and the South African opening bowler then trapped Zain Raja in front and cleaned up Jordan Goddard.

Clifton bowled Faisal Ahmed with a beauty which pitched on leg and hit the top of off stump, and when Hopper castled Shakeel Bashir and Ali Naeem, Woodley were in dire straits at 5-6. Hopper had taken 5-0 on the back of his 5-7 the week before.

Anish Pandey mounted something of a recovery, top scoring with 18, but Zaakir Ashgar nicked Clifton to Dan Hayden at second slip and Pandey was then smartly caught as short backward point by Dion Sampson off the same bowler.

The Peppard Stoke Row reply proved a facile one as Andy Watts (13 not out) and Paddy Hennessy (24 not out) punished any loose bowling to knock the runs off in only 6.3 overs, the game done and dusted by 3.03pm.

WOODCOTE just managed to hold out for the draw in a high-scoring match at home to WEST READING.

Ryan Lennard and James Wheeler got the Woodcote innings off to a good start with an opening partnership worth 60 runs and Stefan Gordon, Steve Henderson and Jez Mayo also chipped in with useful runs.

West Reading always held the upper hand and in the end, James Worsfold, having hit three fours in quick succession, realised the need to shut up shop to achieve the draw.

Asked to bat first, Farley Hill’s openers Ditchburn and Jalil added a comfortable 50-plus start before Ditchburn was sent back to the pavilion, with Jalil following shortly after to an astonishing catch by Danny May, leaving two batsmen on nought.

Both were dismissed cheaply and Farley Hill soon found themselves on 106-6 with a lot of overs to face. However, Greg Coney and Mike Sheridan finished not out with 69 and 42 and the visitors had a defensible total of 218-6.

Peppard Stoke Row’s reply began slowly against some quick and accurate bowling and indecision over running saw Dominic Hall not in the frame, followed quickly by Roy Hayden, hampered by his shoulder injury.

Further wickets tumbled, including another run out and Peppard Stoke Row were 109-6. The late middle order were unable to provide the necessary support, not helped by some rash choices of shot, as Brett Everett grew in form but 142-9 looked a long way from safety until he was joined by Jackson and the pair saw the hosts home to a losing draw.

CHECKENDON restricted WEST READING 2nds to 198 all out at the high-scoring Reading University ground thanks to four wickets from off spinner Rama Adigantla who varied his flight astutely and a tight nine over spell from skipper Vikas Chib who took 2-29.

Osman Mahmood top scored for the home side with 71 and shared a 93 run third wicket partnership with Usman Ali.

Visiting openers Manpreet Singh and Ujwal Tikoo then put on 92 taking the game away from West Reading.

Sam Arrowsmith completed the task by stroking seven well-timed boundaries as he made 31 not out in 16 minutes.

Elsewhere in the division GORING defeated BRADFIELD by one wicket. Batting first Bradfield were bowled out for 243 with Peter Slade taking 6-43. In reply Jack Wintterbottom and Chris Winterbottom hit 86 and 52 respectively as Goring posted 244-9 to gain the narrow win.

On a wicket offering substantial assistance to the bowlers, only James Hern (23) and Pradeep Kumar were able to make double figures for the visitors, but aided by 40 extras, Peppard Stoke Row ended on 106 all out.

U14 Owen Simmons continued his fine maiden season in adult league cricket by taking 2-11 from his five overs, and with captain Rob Dyer bagging 2-25, the away side kept themselves in the game.

There was no let-up for the hosts when the evergreen combination of Mick Chard (2-22) and Allan May (4-28) entered the attack, the duo combining to run through the rest of the Mortimer order as they were bowled out for 96.