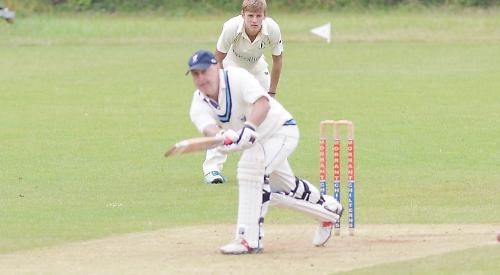 HARPSDEN got back to winning ways in Division 1 as they triumphed at LITTLEWICK GREEN on Saturday.

The hosts won the toss and, due to a brief period of rain delaying the start, chose to insert the visitors. Harpsden openers Cary and Eslick started cautiously, facing some accurate bowling from Brackwell and Ling on a pitch which offered a large amount of both horizontal and vertical movement for the seamers.

The opening batsmen survived a number of scares early on and did well to make it to the 13th over before Eslick was caught in the gully fending off a rising delivery from Brackwell. Cary soon followed and Harpsden were forced into consolidation mode throughout the middle overs, Stevens specifically remaining resolute in the face of wickets falling at the other end due to a mixture of variable bounce and poor shot selection. This left Harpsden reeling in the 24th over at 73–5.

The momentum was to shift back in the direction of the visitors as a partnership between Tom Hancock and Ollie Heath brought Harpsden back on top at 152–6 in the 41st over. Heath, making his first-team debut for the season, punished any loose bowling with great aplomb and Hancock was slightly more watchful in the face of a dangerous spell of bowling from off-spinner Alberlyn.

Hancock then proceeded to accelerate towards the end of the innings, playing a number of classy straight drives on his way to a crucial 62. He was supported ably by new signing J Aston who ended up with 13 not out as Harpsden finished on 202-9 from their reduced 49 overs.

The Littlewick innings began with a stutter as Harpsden, taking the old ball, settled into a rhythm from the outset. Two early wickets came for James Paice who had both openers Mason and Dries caught at short cover by skipper Wright. His opening partner Heilbron bowled tightly from the other end, extracting some vicious turn and bounce, picking up two wickets of his own.

From 29-4 Littlewick mounted a fightback as Ling adopted a swashbuckling approach and proceeded to take the fight to the bowlers on his way to a rapid 43.

Harpsden then took the new ball and through Hancock and Franklin, reduced the run rate through a mixture of tidy bowling and the bounce extracted from a rapidly deteriorating Littlewick wicket.

Wickets fell at regular intervals until Hurley came to the crease. The Littlewick skipper was watchful in defence and dismissive of anything just short of a length. He saw about shepherding the tail through the tricky 10-over period required to get a draw from the jaws of defeat and was ably assisted by Bracknell, the number 11 ending up on 16 not out. However it would prove to be two overs too many as the returning Heilbron had captain Hurley stumped on 45 to end the game in Harpsden’s favour.

A gripping derby saw hosts HURLEY edge out HOLYPORT for a nervous 26-run victory in Division 2, a result that halted the slide of three consecutive defeats in the league.

A pause of 20 minutes allowed the drizzle to clear, the covers to come off and allow a car load of visiting players to edge closer. Even so, the visitors won the toss and set a field of seven.

Hurley could not exploit this early advantage losing Clive Williams in the first over lobbing to point. Hurley’s brittle batting once again cracked as Vik Bhagwani was bowled by the advancing Jayachandran and Dave Simoes was caught on the crease lbw.

After 10 overs Hurley were 26-3 and Holyport were up to 10 men. A splint was applied by Shoab Riaz and Steve Taylor, adding 43 before Taylor drove at mid-off where a tall fielder plucked the catch. Holyport rotated seven bowlers but it was Mo Azmath who wrecked the home side’s middle order removing both Taylors as Hurley subsided to 92-6.

The two Graham brothers then came together with a critical seventh-wicket stand of 39 in eight overs. Henry was first to depart, sweeping and losing his leg peg to Paul Morgan.

Joe followed two overs later but bonus runs from Ameer Ali pushed the home side to three batting points. Phil Ridgeway opted for a second run on a mis-field and his legs were no match for the throw. Hurley closed on 164 from 44 overs, possibly 20 runs short of par on a slow wicket.

Hurley then had the ideal start as Jayachandran edged Imran Arshad’s first delivery to keeper Simoes. Mohammed followed next over, driving a Riaz’s full toss straight to short cover where Henry Graham took a startled catch.

Riaz was bowling with pace and better radar than previous weeks in an unbroken spell of 15 overs. The peripatetic Azarudeen guesting from Crown Wood was hitting the ball hard and at every opportunity and his 34-ball cameo threatened to prolong Hurley’s losing streak before Riaz had him chopping on to reduce Holyport to 80-4.

This sparked a collapse as Riaz and Phil Ridgeway blew away the middle order and five wickets fell for three runs in seven overs.

The game seemed over at 83-8 but a dogged ninth-wicket stand of 49 between Suliman and Tim Hayes edged the visitors to within 33 runs of victory. Riaz got past the Hayes defence and Dave Simoes finished the innings with a leg-side stumping off Arshad to give Hurley a tense victory.

HARPSDEN 2nds had a day to forget as they crashed to a home Division 3 defeat against CHALFONT ST GILES 2nds.

The hosts lost the toss and were put into bat by the visitors as the pitch had been under covers all morning and provided the bowlers with some early assistance. Harpsden were the victims of their own failings as the first three batsmen — Ed Birkett, Ed Andrews and Sam Imlay — were all well caught. At 6-3 after six overs, Harpsden were in trouble but then 14-year-old Liam Hilditch, making his debut, joined Matt Hand and the duo looked untroubled against the bowling of Cross and Ayres.

However, when Hand was adjudged lbw, further consolidation was made by James Brooks and Hilditch as they nudged the score gently to 25-4 in the 24th over before Brooks was undone by some lateral movement.

Jon Stanley hit a couple of lusty blows before being trapped right in front and Hilditch, after a watchful innings, was caught off the glove from one that popped. Neither Matt Stanley nor Will Bevan were to last long and at 42-9 it looked as though Harpsden were going to fail to break 50. However, Rod Birkett came in to join Tom Ham and the pair put on the highest partnership of the innings to take Harpsden up to 54 before Birkett ran out his partner.

Chalfont St Giles decided that aggression was the best way to approach the small target and it proved to be a good strategy. Although the ball spent a lot of time in the air, it typically landed between fielders as the visitors reached their target untroubled despite some aggressive bowling by Ed Birkett.

After a delayed start due to rain which saw the match reduced to 90 overs, Nigel Haines asked the hosts to bat first on winning the toss.

Despite the vagaries of the Holyport pitch, Holyport posted 36 from the first half a dozen overs, despite the loss of opener Tarun Kanti who got his pads in the way of a full toss from Alex Williams.

Paul Edwards and Andy Finlay kept up the flow of runs until extra bounce from Kuldeep Nothey found the glove of Finlay on its way to Abdullah Ali at gully.

Williams struggled to find a consistent line and was replaced by Ross Brown who picked up two wickets in his first three overs to reduce Holyport to 79-4 after 14 overs.

Skipper Haines replaced Nothey and together with Brown put the brakes on the flow of runs. Mike Griffiths showed stubborn resistance and made the most of some good fortune, being dropped at slip off Brown and then recalled by the Hurley fielders when erroneously given out lbw. The dismissal of Edwards, dragging on to Brown, started the collapse of the Holyport innings with the last six wickets falling for 29 runs.

Tight bowling by Brown and Haines, coupled with some bizarre batting, saw the hosts bowled out for 130 in the 35th over.

Chasing a low total for victory should have been an easy task for the Hurley batsmen but it proved to be anything but. The left-arm action of Masood caused problems for the upper order as six wickets fell in the first nine overs with only 24 runs on the board.

Despite some good bowling from Masood and Des Varney, most of the Hurley batsmen were authors of their own downfall with some poor shot selection. Nothey and Mike Walton stemmed the clatter of wickets with a partnership of nine in five overs.

With these two at the crease Hurley still had hopes of pulling off an unlikely victory but a delivery from Masood that seamed away to take Nothey’s off stump put an end to the partnership.

Haines and Walton put together the biggest partnership of the innings (19 in 10 overs) but it was only delaying the inevitable.

When Haines fell to Head at 58-9 in the 28th over the game was all but over. Walton and Williams managed to eke out another nine runs before Walton, trying to farm the strike, edged Razool to the keeper.