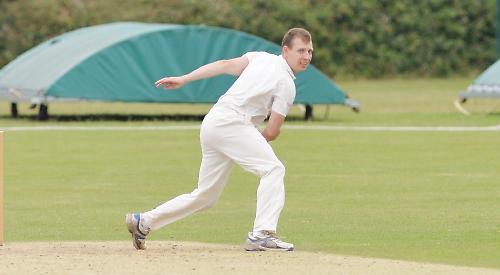 HENLEY 2nds remain in the Division 1 drop zone after going down by four wickets at BOYNE HILL on Saturday.

CHESHAM 2nds completed the double over KIDMORE END in their Division 2A encounter, a result that knocked the visitors off the top of the table.

Following a wet start, two overs were taken out of the game. Kidmore won the toss and in what appeared to be bowling conditions, opted to field. Unfortunately, the conditions had deceived skipper Frost and the pitch offered the bowlers very little.

Chesham, knowing their own pitch well, batted confidently and the wet outfield meant the ball was soft and deviated little off the straight. Despite accurate bowling from the openers, a few missed chances meant that Kidmore were struggling to get a foothold in the game.

The introduction of Jake Easton to the attack brought the first wicket with Mark Hughes-D’Aeth’s leg stump for 23. This did not stop Chesham’s solid batting as opener O’Donavan and keeper Hedges put on 53 for the second wicket.

Spin bowlers Faroqi and Ashby bowled accurately but with such a soft ball there was little turn. Kidmore End’s ground fielding was good and committed and spirit remained determined in the field but their catching was not as accomplished and many chances went missing.

The run rate was not impressive and although Chesham batted well they had not taken the game away from Kidmore End. O’Donavan ended up on 94 but beyond the top three batsmen no one scored more than 17.

Faroqi bowled 14 overs and finished with 4-65 with Ashby holding three catches off him in the deep. Ashby bowled accurately to take one wicket and Taylor bowled well to sneak two wickets as Chesham finished on 221.

In reply Kidmore got off to a disastrous start as they lost two wickets without scoring. With accurate bowling and a drier ball than the one Kidmore bowled with, spinner Aslam was able to extract noticeable turn as he bowled 21 overs without a break. He was supported by spinners and seamers at the other end. With the two early wickets Chesham knew Kidmore would have to force the issue in order to chase the total. For the first 20 overs they set defensive fields and contained both Sheldon and Ashby who found scoring difficult. At the halfway stage Kidmore End were 50-2 with just 23 overs left in the game. Neither Ashby or Sheldon were able to convert their starts into match-winning scores.

The high run rate required in the second half of the game meant Kidmore’s batsmen had to take risks. Whilst some of the lower order, such as Taylor and Faroqi, were able to strike some mighty blows out of the ground, the required rate was just too much and the scoreboard pressure resulted in wickets falling. Kidmore were all out for 149 and lost by 72 runs as Aslam finished with six wickets.

WARGRAVE remain top of Division 3A following their two wicket win at FINCHAMPSTEAD.

Batting first the visitors were bowled out for 214 with Matt Dalrymple top scoring with 101 while Adam Lubbock hit 55. Martin Smith impressed with the ball for the hosts as he finished with figures of 5-60.

KIDMORE END 2nds are now just one point off the Division 7A promotion places despite drawing with NORTH MAIDENHEAD 3rds.

Batting first the hosts put on 253-8 with Azhar Udeen top scoring for Kidmore End with 104. In reply North Maidenhead closed on 207-8 with Udeen starring with the ball, taking 4-53.

In Division 9A hosts KIDMORE END 3rds were held to a draw against THATCHAM TOWN 4ths.

The visitors, batting first, were bowled out for 207 with Kidmroe End closing on 198-7 in reply with Greg Clark top scoring with 58.

Elsewhere in the division WARGRAVE 3rds’ match at YATELEY 4ths was abandoned due to rain. Wargrave, batting first, put on 190-7 with Martin Woods hitting 62. In reply Yateley were on 110-6 when rain stopped play.