Woods amongst wickets as Berkshire close in on title 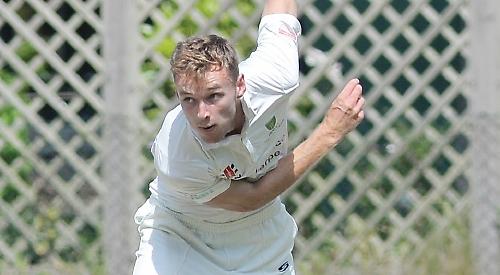 BERKSHIRE extended their unbeaten run in Unicorns Championship matches to 17 games (12 wins, five draws) when hammering HEREFORDSHIRE by 10 wickets in two days at Finchampstead this week, earning them the maximum 24 points.

The current leaders are well on course to retaining the Western Division title with two fixtures remaining — away to Oxfordshire and then Devon.

Although Herefordshire, who won at Finchampstead in 2014, made a promising start on Sunday, reaching 79 without loss, their young side never stood a chance of stopping a very powerful and confident Berkshire side even though the hosts were missing three of their key players, Richard Morris, Ollie Wilkin and Waqas Hussain.

Young paceman Ethan Bamber weighed in with three late wickets, including two in the same over, to finish with 3-51 off 17.

Bamber was brought in late to the side when made available by Middlesex and took the place of spinner Ali Raja.

Berkshire had a new opening pair of batsmen in Sam Burgess and Andy Rishton.

While Burgess fell for 11, Rishton shouldered the extra responsibility in a sensible fashion, playing himself in before pushing along the score.

He went on to make an excellent 74 before playing on Matt Pardoe. He faced 117 balls and found the boundary on 11 occasions, being the third man out with the total on 109 in the 38th over. Scoring did not come easy with the Herefordshire bowlers keeping it tight and not giving much away.

The fourth-wicket pair of Archie Carter and skipper James Morris added 83 before the former was run out for 39, having spent 155 minutes at the crease — giving the teenager valuable experience and confidence at this level of cricket.

Herefordshire, with a first-innings deficit of 193, were soon in trouble second time around, losing both openers for 18 with a third wicket going down at 48.

But, unlike the previous day, the visitors then got their heads down to frustrate Berkshire. Benny Ellis-Dabrowski and Nick Hammond added 83 for the fourth wicket before the latter edged a Peploe delivery into the hands of keeper Davison for 53.

Ellis-Dabrowski occupied the crease for 208 minutes in scoring 79 balls before lofting a simple catch to Rishton off the bowling of Tom Nugent. He faced 194 deliveries but scored off just 44 of them.

Ellis-Dabrowski was the eighth man out with the total on 199 and his side added 16 more runs before being dismissed for 215 in 75 overs.

Berkshire, having taken the extra half-hour at the end of the day, were left needing 23 to win and Peploe knocked them off by himself in two overs, with a six and four boundaries in his 25 off 12 balls.