Fooks and Clifton dig in to secure share of the spoils 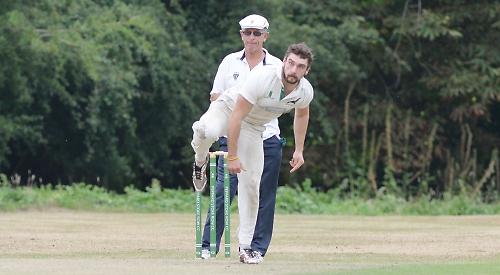 SULHAMSTEAD AND UFTON took another step towards the Premier Division title on Saturday as they defeated visitors WOODCOTE by seven wickets.

The hosts put Woodcote into bat in damp conditions and the visitors struggled from the start against the swing of opening bowler, Doug Macdonald.

Thanks to a half-century from Paul Knox and a good knock from James Wheeler, they recovered from 12-3 but were all out in less than 35 overs, with Siva Aruna mopping up the tail.

In reply the home side didn’t have things all their own way thanks to a tight 12 over spell from Mark Pearson and nine overs from Paul Knox which conceded only 14 runs. However, a 50 partnership between Shiva Aruna and Marc Thompson saw Sulhamstead home for victory in just over 30 overs.

A light drizzle forced the game to be delayed by 30 minutes and after winning the toss, Clifton and Matt Hopper bowled a sensational opening spell which saw only two runs scored in the opening seven overs, the pair beating the bat repeatedly. Welford did start to get going, but Michael Goldsworthy was caught at long on attempting to hit his way out of trouble.

Will Herrington arrived at the crease and immediately looked in control, although he was badly dropped in the gully by Andy Watts when on 20.

The Peppard Stoke Row reply began and continued at a fine pace, but they ultimately lost too many wickets too early. Fergus Nutt (59) continued his magnificent season, but after the hosts fell to 146-7, it was Fooks (46 not out) and Clifton (42 not out) who got them out of jail and a reasonable haul of 17 points on a day when one catch was the difference between joy and despair.

In Division 1 PEPPARD STOKE ROW 2nds suffered a day to forget as they lost by eight wickets at BRADFIELD 2nds.

Olly Nicholson top scored with 18 as Peppard Stoke Row were bundled out for only 91 on a track affected heavily by overnight and morning rain. As the wicket dried Bradfield made the run chase look easy, Jim Chettlebrugh (40) and Ben Hardy (34) putting on 86 for the opening wicket, and while Ian Jackson (2-11) at least scooped his side a point with a couple of late scalps, the home side ultimately romped to victory.

Peter Slade starred with the bat and the ball as GORING moved to the top of the table thanks for a 112 run victory at MORTIMER WEST END.

Batting first Goring put on 203 runs with Slade top scoring with 50. In reply the hosts were bowled out for 91 with Slade taking 4-27.

Damp conditions at CHECKENDON prompted the home side to bowl first against SULHAMSTEAD AND UFTON 2nds.

This appeared fully justified when the visitors were dismissed for 140 in 42.3 overs with left arm spinner Alex Crawford taking 5-15 in 12 overs. Checkendon’s reply began steadily with 35 on the board without loss in the 12th over.

However, once both openers had fallen to Graham Smith, medium pacer Steve Collins stepped in with a remarkable spell of 5-7 in 7.3 overs.

Injudicious shot selection contributed to the demise of several batsmen as Checkendon collapsed to 94 all out in 31.3 overs. Alex Crawford remained undefeated on 37 as Sulhamstead won by 46 runs.

Hugh Asquith made 31, but it wa 55 from Carl Hvass which proved key in propelling Peppard Stoke Row to 174-6 in their 35 overs. In reply Matt Kimber took 4-5 as Waltham St Lawrence were all out for 132.