Youthful Henley Lynx side end season on a winning note 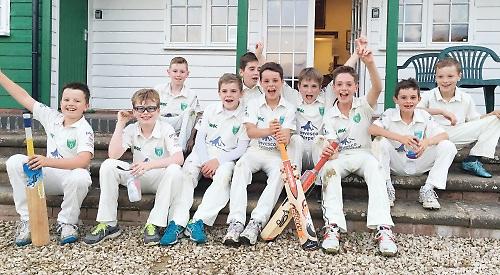 The Lynx finished in second place having won eight out of their nine games in this, their first season with a hard ball.

Oliver Saunders and Freddie Coultas then added 18 to the scoreboard with tail enders Oscar Thomas, Jack Renders, Charlie Hunt and Emerson Proctor adding 48 to take the Lynx score to 326-5.

In reply Henley got off to a good start with the ball with maiden overs from Freddie Corbett, Oliver Saunders, Conor Quinn and two maidens with wickets for Charlie Hunt. The other overs only gave Wokingham low single digit runs.

Spin bowler Mark Colombi also got his reward with two wickets including a fine catch from Will Corbett which meant Wokingham could only reach 224-6. This was another good peformance by the Lynx who included three guest U9 players in Jack Renders, Freddie Corbett and Freddie Coultas.

The previous morning’s rain has left the pitch damp but playable and Henley won the toss and decided to bowl.

Thatcham never really got going and tight bowling from Henley restricted Thatcham to 96-8. Ethan McAleer produced a good bowling display, bagging a hat-trick in his second over to finish with figures of 4-3 while U11 Ted Carter, playing for the U13s for the first time, bowled a fine spell of accurate swing bowling with his two overs only going for just three runs.

As the sun finally came out Henley set out to knock off the required runs but tight bowling by the Thatcham attack kept the lid on the run chase, restricting the score to 29-2 after seven overs. A partnership between Harry West and captain Chanula Wickramaratna wrested control away from Thatcham by a combination of good running and boundaries. Inevitably. West was run out after scoring an impressive 27.

Wickramaratna was then joined by Nathan May who proceeded to smash several boundaries including a massive six over mid-wicket to finish on 25 not out with Wickramaratna retiring on 30 not out. Henley finally finished on 101-4 in the 16th over.