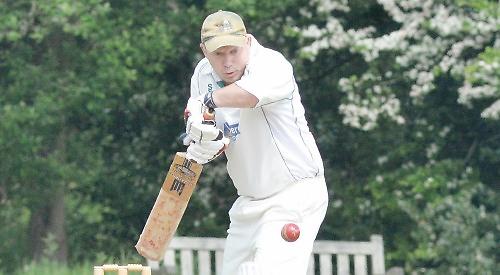 PEPPARD STOKE ROW UNICORNS skipper Josh Perkins won the toss on Sunday and his side successfully restricted WARGRAVE to an achievable total after the visitors’ openers had raced to 146 for no wicket after 20 overs, with Sam Bowers hitting nine sixes.

Michael Cowdell, the other Wargrave opener, profited from a simple dropped catch at mid-on when on 70 and eventually retired in the final over on 101 having batted the entire innings.

The tide turned for the Unicorns after drinks when Hamish Scott ran out Sam Bowers for a well-made 82 from deep extra cover and, with the help of a six over spell of spin of 5-10 from Chris Humphreys, the home side held good catches to see Wargrave post 249-9 off their 40 overs.

Scott Harris and Max Baker-Smith got the Unicorns reply off to a blistering start but when Harris holed out to deep midwicket and Baker-Smith was adjudged lbw the home side still needed 180 for victory at more than a run a ball.

David Williams and Olly Nicholson put on a good partnership to keep the home side on track, both registering half centuries. Williams’s solid driving and good running between the wickets and Nicholson’s hitting, including a six over the Peppard pavilion, played a key part in maintaining the required run rate. After Williams was bowled leaving a straight delivery and Nicholson was run out by a direct hit from cover it took Hamish Scott, unbeaten on 32, to steer the Unicorns to a well-earned victory with more than three overs to spare.

Hosts PEPPARD STOKE ROW MAHARAJAS and SWYNCOMBE played out a tie in Sunday’s friendly that saw several good displays by the hosts’ juniors.

After the hosts elected to bat they needed the level heads of Chris Lee and Andy Watts to rescue the side from a precarious 33-3 to a more balanced 85-4.

After Chris Lee was caught and bowled by Hope, Watts was eventually out for 72 off only 48 balls. Ed Atkinson and Ed Bruun, both 13, showed great maturity to form a 50-run partnership and help the home side post 183-6 off their 35 overs.

Swyncombe’s reply was underpinned by a good 52 from Hope, following fine opening spells from Ed Hanley and Will Atkinson.

The game was in the balance with six overs to go and with 20 runs to get, but the bowlers kept up the pressure with Danny May taking 3-48 and Ed Hanley taking 4-22 off seven overs.

The final over saw a tense finish when Swyncombe needed five to win, which became two to win off the final ball. A single was then taken for the match to end in a tie.