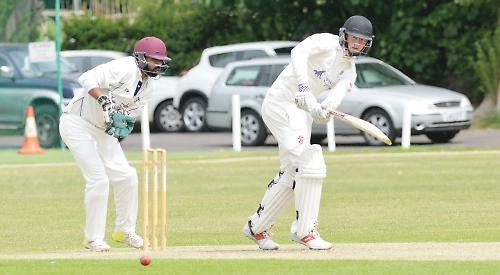 INCLEMENT weather across the Home Counties denied both HENLEY the opportunity to extend their lead at the top of the Home Counties Premier League Division 1 table, and others to make up some ground on the league leaders. Not one game was completed, with only a few getting underway at all.

One of those games did feature Henley, who having lost the toss at Matson Drive, were put into bat by BANBURY.

Only nine overs were possible before the rain set in, which were dominated by some good new ball bowling by ex-Pakistan bowler Aizaz Cheema and Bradley Taylor. Both made the most of the new ball and a wicket offering just enough seam movement, putting the ball consistently in a good area and always asking questions.

Cheema accounted for in-form players Roberts and Hussain within the space of three balls, the former driving a ball to cover and the latter nicking off to keeper Hawtin. Youngsters Jack Davies and Euan Woods looked immovable and if it wasn’t for the rain, both players looked set to go and dominate the rest of Banbury’s arsenal of bowlers. However, after an early lunch was taken, with the rain not looking like abating any time soon, both the captains and umpires decided to abandon the fixture.

All 10 sides in the league came away with six points, meaning a status quo at the top of the table.

Tomorrow (Saturday) Henley visit Finchampstead (Saturday, 11am) for a crucial match at the top of the table.

With two thirds of the season gone, Henley are league leaders on 195 points and Finchampstead are 20 points behind them in second place.

Henley have lost just two matches this season but one of them was to Finch in a 50 over match earlier in the season at home. On that day at the end of May, Henley won the toss and decided to bat, and proceeded to 208 with just one wicket down when the visitors finally managed to get the wicket of Roberts, out caught for 120. Henley then collapsed to 237 all out and Finch clawed their way back to a winning total of 242 for 8 with just three balls remaining.

This is Henley’s chance to make amends at the home of last year’s champions who have not had matters all their own way this season, losing four games including three at home. Their South African bowler Jandre Coetzee has not had quite the same devastating impact as last season though he has still landed 18 wickets at an average of 19. The two other most effective bowlers this season have been spinners, with Jonathan Dewes.

In the batting department Andrew House has 487 runs, Marles has 426, the promising Will Rogers has 396 and hard-hitting Dan Lincoln, who hit 61 off 43 deliveries in the match at Henley, has 307.

In Division 1 of the Thames Valley League, Henley 2nd s are at home to Finchampstead 2nds while Henley 3rds travel to Aldershot 2nds. Both matches start at 1pm.