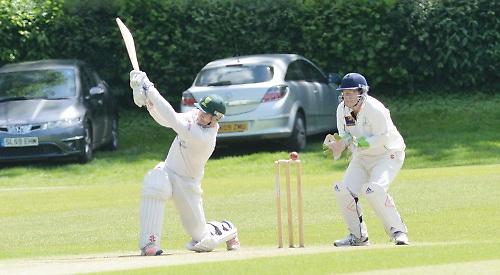 HENLEY were crowned this season’s Home Counties Premier League Twenty20 champions on Sunday following two dominant displays to become the only side to win the competition more than once since the competition’s inception.

The latest triumph was Henley’s third success in seven years.

The venue for this season’s finals day was Burnham Cricket Club, which is producing wickets not too dissimilar from outfields at the moment meaning high scoring, big hitting affairs were never going to be the order of the day.

It appeared only Henley were able to truly come to terms with the conditions at hand, adapting their tactics and style of play to meet the challenges on offer.

Due to the wet conditions and Burnham’s second ground being unplayable due to a set of ineffective covers, it was decided that two Ten10 matches would make up the semi-finals, with the final reverting back to a Twenty20.

Having won the toss against last year’s champions HIGH WYCOMBE, Henley elected to bowl, taking advantage of the opportunity to see how the wicket would play and learning from Wycombe’s innings.

The Buckinghamshire side are notoriously aggressive but are also known to lack tact in more tricky conditions, a reputation evident from the outset when shorter-format specialist Ashraf provoked a poor shot from opener Casteleden, who hacked a ball down Nugent’s throat at deep-midwicket to leave Wycombe on 0-1.

This dismissal set the tone for the innings, epitomising a gun hoe approach which didn’t work in such poor batting conditions. At the same time, a lot of credit must go to Henley’s bowlers, all of whom executed their skills well and were athletically supported in the field.

Afridi and Nugent showed their quality and desire to make a difference in the fixture with the newer ball, whilst spinners Ashraf, Woods, Singh and Brock bowled with skill and to well thought-out fields.

Wycombe’s total of 54-6 off their 10 overs was never going to be enough, as Roberts and Allaway, who both led Henley to the club’s inaugural Twenty20 championship in 2011, knocked the runs off in seven overs.

Allaway led the way, playing a wide-array of shots the best of which being a well-struck straight six off spinner Dobb. He finished not out on 34, with Roberts happy to simply give the aggressor Allaway the strike, finishing not out on 18.

The win provided Henley with a good blueprint of how to go about their business in the final, and having lost the toss to the other semi-final winners HAREFIELD, were again in the field first.

Henley’s bowlers proved too strong and too disciplined for Harefield. Provided limited opportunities to score, Harefield’s batters had to go hunting for runs and in their attempt to do so, lost wickets at frequent intervals.

Afridi and Nugent both picked up one a piece, with the latter also producing a smart runout, whilst Brock (2), Woods (3), Singh (1) and Ashraf (1) all showed the quality available to Henley in the spin department. As has been the case all season, Henley’s fielding was again outstanding, with Zac Jones in particular taking a few smart catches at mid-off.

Harefield’s total of 59 was again simply not enough to trouble Henley, despite losing skipper Roberts early on in the run chase. With Allaway pulling a hamstring whilst fielding, Afridi was chosen to open and ably supported Henley’s number three Waqas Hussain with both finishing 18 not out and 40 not out respectively. The latter’s shot selection ensured he was the standout player of the day, coming to terms with the conditions better than anyone on any team. Henley’s victory reflected how this team is a sum of its parts, with each player contributing throughout the day.

Henley will now travel to Bromsgrove Cricket Club on Sunday to compete in the area finals where they will face Northamptonshire side Finedon Dolben. The winners of this match will then face the winners of the Cannock and Rugeley Hawks versus Rothley Park match later in the day. The winners of this fixture will then progress to the regional finals on August 13. The final of the competition will take place on September 11 at Derbyshire CC. Although winning the Home Counties tournament provided skipper Roberts with his first piece of silverware, his and the team’s focus seems to be very much on the challenges ahead. Speaking after the win Roberts said: “It’s great to win the Twenty20 tournament and days like these don’t come along all that often, so we will enjoy celebrating with each other tonight.

“However we have a fantastic opportunity now to go and win the National Twenty20 competition. Despite likely losing a number of players to Minor Counties fixtures next Sunday, we are confident of having a side with the quality to go and put ourselves into the last eight.

“The league run-in is hotting up and with a big game against Finchampstead on the horizon — we will enjoy today but be back to work in the week.”