Peppard SR on the up despite abandonment 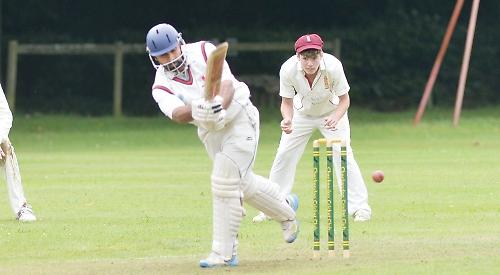 JUST one fixture throughout the five divisions of the Berkshire League was completed last Saturday as rain forced most matches to be either abandoned or cancelled.

WOODCOTE made a fruitless journey to RUISLIP VICTORIA in their Premier Division clash.

The visitors elected to bat on a dry starting wicket after an agreement between the captains to play a 50 overs match. Woodcote reached a respectable total with Paul Knox and Jez Mayo the main run-makers.

The teams turned straight round between innings and after some early successes for opening bowlers, Mark Pearson and Paul Knox, Ruislip seemed to be gaining the upper hand before the rain intervened and washed the game out causing an abandonment half way through the Ruislip innings.

PEPPARD STOKE ROW moved up to third in the table despite their game at home to league leaders SULHAMSTEAD being abandoned.

With drizzle in the air, the game was delayed and subsequently reduced to 40 overs per side, and the visitors elected to bowl after winning an important toss.

Mindful that heavy rain was forecast, the hosts made a watchful start courtesy of Don Townsin and Fergus Nutt as they attempted to ensure they were not skittled out cheaply.

It took until the 16th over for Sully to make the breakthrough, Craig Palmer bowling Townsin, and when Sam Fooks was caught at cover off Shiva Aruna, Peppard Stoke Row were 38-2.

Nutt was the next to depart, caught at backward point off Palmer for 35, and when Dan Hayden was caught behind by Aaron Briggs off the returning Doug Macdonald, the hosts were 72-4.

Skipper Richard Ashton looked in good touch for 21 until he was caught at deep backward square leg by Macdonald and with Aruna (5-25) taking three wickets in four balls, Peppard Stoke Row crashed to 89-9.

A valiant rearguard from Michael Chard and Will Atkinson ensured the home side were able to bat out their overs, albeit only able to reach 102-9.

The forecast rain finally arrived during the tea interval and the game was abandoned shortly before 6pm with Peppard Stoke Row moving up to third after Berkshire County Sports incurred a five-point penalty for recording their result late.

In Division 1 CHECKENDON won the toss and elected to field first in their clash with GORING.

The visitors put on 113-9 off 30 overs with Rama Adigantla taking 5-29 for the hosts. In reply Checkendon were on 68-0 when rain stopped play.

PEPPARD STOKE ROW 3rds U15 player Sam Butler made a fine league debut in his side’s home Division 3 match against SANDHURST 2nds but ultimately the match was eventually another victim to the weather.

The hosts fielded a side with eight U15s, and made a worrying start as four wickets fell early on.

However, Ed Bruun made a gutsy 15 at the top of the order, and with the more experienced Allan May chipping in with 22, the hosts gained a foothold in the match.

It was Butler and fellow youngster Jem McAllister (29) who stole the show, the pair showing maturity far beyond their years in sharing a handy seventh-wicket partnership.

Butler ended unbeaten on 42, and the hosts' total of 149-8 was possibly par in tough conditions.

Captain Rob Dyer made two early breakthroughs in the Camels’ reply, but the game was called off as heavy rain flooded Peppard Common with the visitors 28-2 from eight overs.