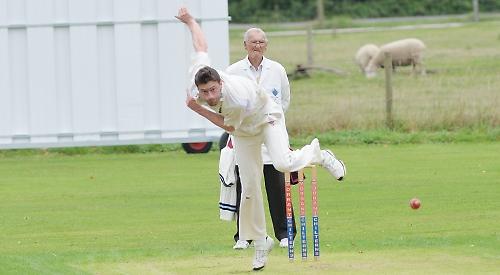 In Division 1 Lyle Heilbron took 5-18 for HARPSDEN at PINKNEYS GREEN as the hosts, batting first, posted 102-8 before the match was abadoned.

The start was delayed by 25 minutes as light drizzle gave way to Jeff Dawson signalling the covers to come off. Hurley unleashed the left arm quick of Jon Kemmis-Betty who trapped James Martin lbw with his second ball and then sent back Clayton and Bambridge each without scoring. The visitors were 15-3 with skipper Dom Spencer defiant at the other end.

Spencer was then joined by Goldsmith and these two began to turn the match round with a fourth wicket stand of 75 in 17 overs.

Goldsmith punished anything leg side, and it took two juggling attempts for Varun Sharma to send him back. Edmund joined Spencer who was now hitting freely putting on 61 for the sixth wicket as these two batsmen found gaps.

Two clipped boundaries to leg saw a third ball fired in at Edmund’s leg stump by Ridgeway to end the partnership. Spencer finally fell to a good catch on the midwicket boundary by Sharma, but with rain clouds gathering a halt was called and tea taken at 4.36pm with the visitors on 174-8 after 46 overs. No further play was possible and hands shaken at 5.45pm.

HARPSDEN 2nds were aiming to get back to winning ways against WHITE WALTHAM 2nds in Division 3 having not won since the middle of June. However, it was not to be as the weather again denied them after a dominant display in the field on a perfect batting track.

Harpsden skipper for the day, Mark Cooper, won the toss and opted to put White Waltham into bat. They were rewarded early as Tom Ham got the wicket of in-form opener Mohammed Nasir for 12 and Liam Eslick with a smart piece of fielding ran out Bhachu. Bowley and Kamath rode their luck but were aided by the trueness of the pitch as they put away anything that was slightly off length. The decisive bowling partnership was Ed Birkett and Shazad Gulfraz as the aggression from the former was complemented by the guile of Gulfraz and from 130-3 White Waltham were to eventually capitulate to 160 all out. Ed Birkett, returning to full fitness having been injured for two months, bowled with great pace and bounce that accounted for Bowley and Beard as they were caught behind and at short leg respectively from balls that surprised them.

Gulfraz bowled a fine spell, taking 4-28 off his 15 overs of pitched leg spinners. He was aided by some good catching, notably from Matt Hand at short leg, Cooper in the slips and Tom Ham at mid off. Rod Birkett returned to the attack and mopped up the tail, finishing with 2-37 off his 13 overs.

Cooper and Liam Eslick opened the batting for Harpsden but were only able to face one untroubled over before the rains came down and play was abandoned.