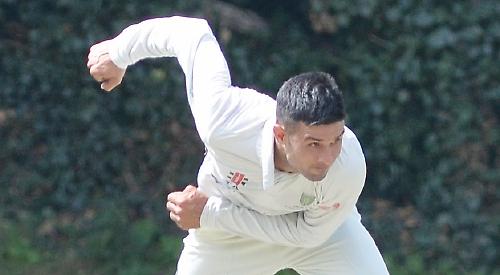 FOR the second week running, rain hampered HENLEY’S chances of extending their lead at the top of the Home Counties Premier League Division 1 table.

Playing second place FINCHAMPSTEAD, the visitors managed to reduce the hosts to 109-7, with a dominant bowling display which could have been further improved if it wasn’t for a rare lacklustre display from the Henley fielders.

Both sides walked away with six points apiece, meaning the status quo at the top of the table remained, with all other games in the league also eventually being abandoned.

Missing regulars Richard Morris, Matt Rowe, David Barnes, Jack Davies and Euan Woods for various reasons, with the latter on 12th man duty for England at the Oval, Henley went into Saturday’s fixture with a side made up of a number of second team players.

Although on paper this perhaps looked a weaker team, Henley Cricket Club has developed strength in depth over the last 18 months and with its second team playing in only two leagues below, the side fielded was more than a match for last year’s champions.

Tom Nugent and Tahir Afridi were again outstanding, the former unlucky to not take more wickets and the latter bagging a ruthless five wicket haul, hitting the seam on a regular occurrence and getting the ball to move both ways in the air.

Finchampstead had no answer with only young Berkshire prospect Rogers showing any resistance, remaining unbeaten on 41. After a number of reprieves, House was the first to go, eventually caught by Harry Jordan at mid-on off the bowling of Nugent. Oliver soon followed, caught by Euan Brock at point off Afridi, before Nugent grabbed his second wicket, clean bowling Finchampstead’s robustly built captain Marles for 11.

Both Lincoln and Carter attempted to rebuild with Rogers, however they lacked the requisite skills and determination to withstand Afridi’s relentless onslaught, which also accounted for Coetzee, caught by Stewart Davison standing up to the stumps. Lincoln was caught by Will Legg at midwicket, whilst Carter nicked off to first slip substitute fielder Morris, who is set to return to action this weekend against High Wycombe after an injury lay-off. Just before the rain set in, Afridi had his fifth, Hodges caught again by Legg at midwicket.

Although frustrating to not gain full points, captain Roberts took the positives from the game. He said: “We are continuing to show great skills and character regardless of the opposition or the weather.

“If we can continue to enjoy the moment and nail our processes, we’ll be a handful for most teams on the run-in. However we have a big game this weekend against High Wycombe, who are always dangerous and full of quality, so we’ll have to be at our best to get full points.”