Big-hitting Trinidad and Tobago side roll back the years 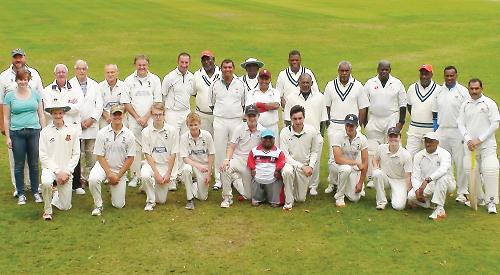 EXPERIENCE won the day as the touring TRINIDAD AND TOBAGO OVER 50s defeated PEPPARD STOKE ROW by 26 runs in a keenly-contested friendly on Thursday of last week.

The West Indian side had been let down by two minor counties and were in danger of not having a fixture in their first week on tour, but were willing to visit the Berkshire League side in a bid to find form.

The visitors batted first, but lost Farouk Yattily when the Home Counties Premier League duo of Chris Humphreys and Hamish Scott combined to give the latter a wicket.

However, that was as good as it got for the home side in the field, Joel Bristol (74) and Kumar Ramprasad (115 not out) showing that age is merely a number as they shared a huge second-wicket stand.

Peppard Stoke Row’s young side put down a quartet of chances and it was only Oxford spinner Humphreys (1-33) who picked up a wicket, bowling Bristol as Trinidad closed on 228-2 from their 35 overs.

Paddy Hennessy (20) and Don Townsin gave the home side a solid platform until the former edged Selandi Sobars behind.

The rate gradually climbed during the home side’s chase, and when Townsin fell for a well-crafted 48, Peppard Stoke Row required nearly 12 an over. Captain Richard Ashton played a mature innings which included five maximums, and he passed 1,000 runs for the season before edging opposing skipper Patrick James to his brother Gerrard for 71 as the hosts were left needing 73 from the final six overs.

Spritely contributions from U16 duo George Lee (20) and Danny May (18 not out) sadly proved in vain as the home side could only reach 202-5.