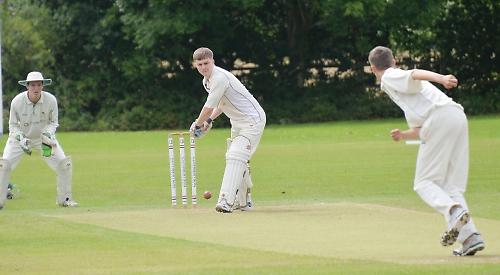 SONNING COMMON VILLAGE put up a spirited show at KIDMORE END on Sunday but the batting power of their more illustrious hosts proved too much for them and they succumbed by four wickets.

The visitors batted first on a good wicket in a 40 over match. Kidmore fielded a number of talented youngsters amongst their first team players and the visitors had to work hard for their runs.

Skipper Chris Pitson showed the way with a fine 55 and he and Howard Cook put on 105 for the second wicket. Vinnie Sheehan then held the middle order together with good support from Markland Tidswell who struck some hearty blows.

Sonning Common had held back some of their most experienced players and veteran Chris Gallimore and the ever youthful Paul Barker hit some agricultural shots to give Sonning Common a respectable 208-9.

In reply Kidmore End lost an early wicket but Russell and Frost coped with the Sonning Common pace attack with ease. Russell particularly playing the square cut well on a number of occasions in his 88.

Once the visitors took the pace off the ball, Kidmore’s scoring rate slowed and veterans Nick Pitson and Chris Gallimore began to get some sort of control, with youngsters Andy Tidswell,
Paul Barker and Luke Pitson excelling in the field for Sonning Common.

Kidmore End had scored quickly early on and never really looked in any sort of trouble. Three quick wickets from Louis Gallimore and Luke Pitson made things a little interesting but Leonard produced some fine shots to see his side to a four wicket victory.