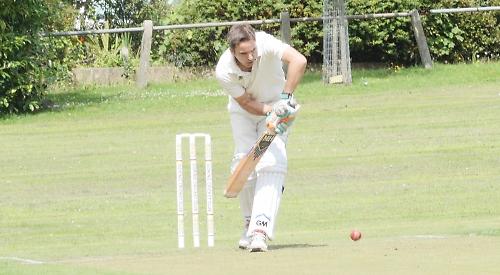 PEPPARD STOKE ROW pulled off an upset to defeat hosts WEST READING by 18 runs in their Premier Division clash, leapfrogging the reigning champions to move second in the table last Saturday.

A heavy downpour shortly before the scheduled start resulted in the game being reduced to 43 overs per side, and after losing the toss, the visitors made a steady start as they reached 65-0 after 15 overs.

Another thunderstorm saw play again halted, the game now further reduced to 40-overs-per-side, but a fine innings of 70 from opener Fergus Nutt, added to a brisk 31 from Matt Hopper and useful cameos from Richard Ashton, Dan Hayden and U16 debutant George Lee saw the visitors total 169-9.

Kazam Kamal gave West Reading a blistering start as he blasted 33 from only 23 balls at the start of the reply, but at the other end, Alfie Clifton had the prolific Adam Davidson caught behind for just seven before trapping the league’s leading run scorer, Zafar Ali, lbw first ball.

A diving catch by youngster Will Atkinson at deep backward point gave Hopper (2-41) retribution on Kamal and the South African then claimed the key wicket of Qamar Abbas, clean bowled, shortly after.

Clifton’s impressive 10-over spell ended with him bowling Sultan Khan and collecting a second lbw – Taskeen Ahmed – and West Reading headed to drinks on 62-6 after 20 overs.

A brief flurry of runs was halted when Dion Sampson trapped Usman Tariq in front, and the off spinner then enacted a sensational direct hit run out to end Emad Khan’s dynamic 30 from 26 balls.

West Reading kept coming, though, with Adeel Razaq and Ahsan Iqbal both hitting sixes but the irrepressible Hayden removed both of them – the latter well-caught at deep mid-wicket by Nutt – as the hosts were dismissed for 151.

Not for the first time this season, WOODCOTE conspired to snatch defeat from the jaws of victory at home to BERKSHIRE COUNTY SPORTS.

In a game shortened by rain, they inserted their opponents and had them reeling at 15-5 with Mark Pearson almost unplayable as he returned figures of 5-23 in 10 overs.

Usman Asif was then dropped while in single figures and some wayward bowling in the second half of the innings let the visitors off the hook.

Woodcote still looked favourites to win at 122-3, and 153-4, but then came the collapse with six wickets falling for only 18 runs, including two run-outs, as Berkshire County Sports won by 11 runs.

Having been asked to bat on a good track West Reading started briskly with Saad Jaffary racing to 52 in quick time courtesy of three sixes over deep midwicket.

After 15 overs West Reading were well-placed at 75-1. Olly Nicholson then bowled Jaffary through the gate with his third ball to begin a period of domination in the field by the hosts. Nicholson’s left-arm seam and Taylor Vines’s left-arm spin severely restricted the visitors’ run rate for the next 21 overs as West Reading scored only 41 runs and lost wickets at regular intervals.

The quality of the Peppard Stoke Row juniors’ fielding was a particular highlight. Vines took a return catch to dismiss Ameen for a duck while Gerry Bacon took a stumping off Nicholson to leave the visitors reeling at 106-7. Nicholson finished with 4-22 off 10 overs; Vines’ tight spell was 2-19 off 11 overs.

West Reading looked to counter-attack but were again denied when Danny May held a difficult chance above his head at deep midwicket to send back the dangerous Asif. The visitors eventually posted 155-9 off their reduced allocation of 42 overs.

The Peppard Stoke Row reply got off to a bad start when Riaan Ackerman was bowled by an Asif in-swinger in the second over while Marcus Laing was run out by a direct hit from cover.

After Gerry Bacon departed lbw for 16 the home side were in danger of a collapse but Danny May played a patient and determined innings and, with the help of the hard-hitting Nicholson, the pair produced a partnership of 75 to stabilise the home side’s innings. When Nicholson was eventually bowled for 49, Allan May joined his son at the crease and kept the run rate moving along, including a deft cut shot over the slips despite carrying a calf injury.

Sam Kimber hit the winning runs as Peppard Stoke Row wrapped up victory with five overs to spare for the loss of only five wickets and with Danny May playing a mature innings to remain undefeated on 54.

Elsewhere in the division GORING slipped down to fourth place in the table following their losing draw at home to IBIS MAPLEDURHAM.

Goring won the toss and elected to field. This appeared to be the right decision early on as the visitors lost both openers with just 14 runs on the board. However, good contributions from the middle order saw the visitors eventually close on 145-7 with Ollie Carrier taking 3-57 for the hosts.

In reply Goring found runs hard to come by with wickets falling regularly but they held on to secure a share of the spoils on 107-9.

Pradeep Kumar (46) and Don Townsin (43) led the way for the visitors during a rain-interrupted innings which ultimately saw them close on 146-4 after 30 overs.

That total was never going to be enough once openers Ghalib Hussain (43 at a run a ball) and Fahad Raja (89 not out off 73 balls) got going, and West Reading reached 150-2 in only 21.5 overs. Mick Chard and youngster Owen Simmons were the wicket takers for Peppard Stoke Row.