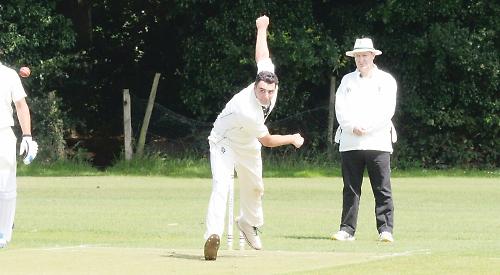 HENLEY 2nds pulled further away from the Division 1 drop zone as they took nine points from their draw at FALKLAND on Saturday.

The hosts, having won the toss, put Henley into bat first and the visitors put on 152 off 37.1 overs.

In reply Falkland ended their innings on 101-6 with Zia Ashraf taking 4-42 for the visitors.

KIDMORE END ran out winners in their home Division 2A clash with HAYES.

The Hayes side batted with caution interspersed with big hits off Frost’s bowling. Jeff Sheldon bowled accurately, picking up one wicket in an initial nine over spell, thanks to a stunning leg side stumping by Leonard.

Calem Taylor replaced Frost in the bowling attack and took a wicket in his first over. The Hayes batting line up did attempt to push some singles, but on the whole this gave them little success, so they stuck to mighty blows or defensive prods.

The top order had amassed 91-4 in the first 21 overs but the cricket was all played at a rush as bad weather was imminent. After a number of flashing lightning forks and then rumbling thunder, the umpires removed the teams from the field at 2pm before the rain came down for around an hour.

Tea was taken early and overs were removed from the game. Both teams waited as the stormed cleared and rays of sunshine shone down and started to dry the pitch. Played resumed at 4.35pm and Hayes had 18 more overs to bat.

Kidmore started with two seamers, Sheldon and Taylor, but it quickly became clear that the pace on the ball was aiding the batsmen, so Frost switched to the guile of Faroqi and the turn of Ashby.

This switch was rewarded almost immediately. Faroqi engineered a wicket thanks to a good catch in the deep by Fountain. Richard Frost took a good catch at short extra cover off of Ashby and then a simpler one shortly afterward.

Leonard, who had stopped keeping after a finger injury, caught another from a top edge when Faroqi was bowling and suddenly a collapse was occurring. Knowing they had less overs to bat than normal Kidmore sought to bowl the opposition out in hope of gaining a little more time, and the spin twins duly obliged. Ashby had a wicket due to a good stumping by Tom Sheldon, and Faroqi’s subtle change of pace bowled the last man as Hayes were all out for 167, giving Kidmore End 37 overs to chase a much lower score than they were expecting.

The Sheldon brothers opened the batting and saw off a threatening spell from Wayland and Madial, as both bowlers swung the ball and seamed the ball markedly. They put on 39 for the first wicket, the best opening stand for some weeks, when Jeff Sheldon was caught for 10.

The score of 41-2 led to Ashby and Tom Sheldon rebuilding the innings in style as both players made conditions look a lot easier than anyone else had all day. Both players drove and cut the ball with a commanding calming confidence that made the rest of the team relax.

The score raced to 84 but when Tom Sheldon was caught for 42, and a little later Ashby was out for 35, the score was 116-5. The loss of these players caused some panic and no doubt this contributed to the middle order collapse.

Taylor, Fountain and Bodeker were all dismissed cheaply and Hayes had found a bowler who could exploit the murky conditions well in Prabhjot Singh. He had taken three wickets and forced the game back into his side’s favour. The score was now 120-7.

Frost joined Leonard at the wicket and the pair had to hang on as the bowling was accurate and testing. Frost was lucky to survive but Leonard batted in a calm and confident manner, seizing on anything short, pulling the ball into the adjacent field. This dampened the ball and made it move less noticeably.

Slowly Frost was able to assist Leonard by hitting a few boundaries of his own and with the pair running frantically between the wickets the target got closer and closer.

Just four runs away from victory Leonard’s calm vigil was ended and the nerves hit through the batting side, whilst adrenaline pumped through the bowlers. Richard Frost managed to dig out some vicious Yorkers on his arrival at the crease from Singh who ended the game with five wickets from 9.1 overs for just 35 runs. However, Singh’s efforts were in vain and the Frost duo eked out the remaining four runs during their four over partnership to help the hosts to a two wicket victory.

Batting first the visitors put on 137-8 off their allotted overs with J Rimmer taking 6-52 for the hosts. In reply M Cowdell top scored with 53 not out and W Allum hit 52 not out as Wargrave eased to 139-2 to secure 25 points. HENLEY 3rds moved up to second place in Division 5B thanks for an eight wicket victory against SLOUGH 4ths at Nettlebed.

The visitors, batting first, were bowled out for 205. In reply Gurung hit 106 not out and Price chipped in with 78 as Henley eased to 209-2 to secure maximum points.

Elsewhere in the division WARGRAVE 2nds boosted their survival hopes as the visitors ran out winners by five wickets at CHISWICK AND WHITTON 2nds.

The hosts, batting first, were bowled out for 119 with Wargrave closing on 123-5 to secure 25 vital points. KIDMORE END 2nds’ promotion hopes suffered a set back as they were held to a draw at MAIDENHEAD AND BRAY 3rds.

Home side WOKINGHAM 5ths eased to a comfortable nine wicket win against KIDMORE END 3rds. Batting first Kidmore End were bowled out for just 37 runs. In reply the league leaders eased to 41-1 in 8.1 overs.