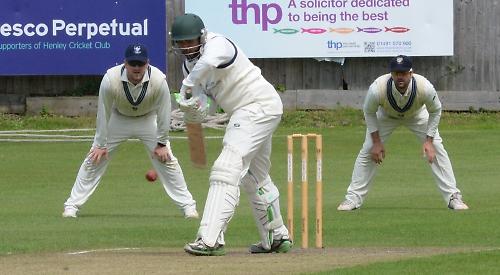 HENLEY’S Tom Nugent produced last over dramatics to help his side overcome HIGH WYCOMBE last Saturday, and in doing so extended the league leader’s advantage at the top of the Home Counties Premier League Division 1 table to 26 points.

Requiring one more wicket for victory as the clock struck 7pm, Nugent produced a yorker straight out of the top drawer to bring up his fifer and cap off a Henley masterclass in how to take 10 wickets on a flat batting wicket at the Brakspear Ground.

Having won the toss on a humid yet overcast morning, Wycombe captain Nathan Hawkes decided to field, looking to take advantage of any overhead conditions and a wicket which appeared a little damp and tacky.

Despite losing skipper Michael Roberts early on, caught behind off the bowling of Hampton, the returning Matthew Rowe and Waqas Hussain played aggressively, causing the Wycombe bowlers to lose their composure and ensuring a fast start to the Henley innings.

After a dashing 30 and with the score on 40-1, Rowe departed lbw giving Hampton his second of the morning. This was to be the last threatening breakthrough for Wycombe, as Richard Morris joined Hussain and both players began to find their stride, adding a real element of class to the fixture before Morris was bowled by Haddow for 24.

Euan Woods and Hussain, the latter having now brought up his half-century, began to seamlessly rattle along at five an over, bringing up the 150 in the 34th over.

After Woods was caught behind off Haddow for 51, Davies played a fine cameo either side of a frustrating rain break, which repeated an earlier interruption to proceedings before lunch which looked to threaten the day’s play. Fortunately, this would be the last rain break, which allowed for Davies to crash a number of boundaries into the Little Angel and for Hussain to bring up his second century of the season.

Although Hussain and Davies departed in quick succession, Henley had by this stage got themselves into a good position and after a few lusty blows by Afridi, set Wycombe 261 to win off 46 overs.

Despite not being able to account for rain breaks, Henley adapted well and ensured they maintained a strong run rate, meaning Wycombe needed to be good from the outset of their chase to stand a chance.

Unfortunately for the visitors, combining a bowling attack at the peak of its powers with defence-minded opening batters, the run chase never really looked on and it soon became a matter of whether Wycombe would survive as opposed to whether they would chase the Henley score down.

After Nugent dismissed both openers cheaply and Afridi trapped Duncan lbw for a duck, it was left to Hawkes to salvage a result. However, after Afridi cannily ran out Castleden off his own bowling, deflecting the returning ball onto the stumps at the non-strikers end, Wycombe were reeling on 38-4.

Gurveer Singh’s introduction from the Remenham Hill end further added to the away team’s problems, having Russell caught by Morris after top-edging an attempted sweep. Although Hawkes was given a reprieve by his counterpart just before tea, dropped at mid-off after some guileful spin bowling by Singh, Woods got one to turn through his gate on the resumption of play, putting Wycombe in real danger of being bowled out.

Anjula showed some valiant resistance and in doing so showed what was possible on what was still a good batting wicket. His 51 off 36 balls seemed to put paid to a Henley victory. That was until Nugent was brought back into the attack, with Singh now operating from the pavilion end.

Henley’s spearhead proceeded to produce a spell which may prove defining over the next few weeks, as no other team has a bowler who could have secured the 25 points on such a flat wicket. Nugent first of all removed Owen, caught smartly by Woods at gully, before accounting for Dobb lbw.

Although Henley had 10 minutes to find the final wicket, Hampton and Haddow both showed the fight this Wycombe side still has when its back is to the wall, and after an unsuccessful final over by Singh, it was left to Nugent to bowl six of his best at number 11 Hampton. As it was Nugent only required one delivery, executing a Yorker of precision which ripped through Hampton’s defences to spark celebrations on and off the field.

Speaking after gaining such a crucial win in their quest for the league title, Roberts said: “Today was a great win and we will soak it in and celebrate our success this evening. Nuge and Waxy were particularly outstanding. However we still have four 50-over games to win and will be back to work in the week to ensure we give ourselves the best chance of performing well at Oxford next weekend.”