Heilbron shines with bat and ball for villagers 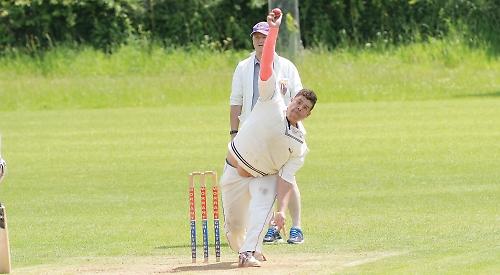 HARPSDEN entertained the CARY ALL STARS in their annual 40 over match on Sunday.

Zac Jones got off to a good start before he was caught and bowled by Tom McLellan for 25 off just 15 balls. When Jack Roddan departed, Will Stevens joined Lyle Heilbron and the two of them made good progress although tight bowling from both the Cary brothers, Horatio and Alfred, as well as Charlie Hill, kept the Harpsden run rate in check.

Although Heilbron fell short of what would have been his maiden Harpsden century, Justin Bradley and Will Stevens saw Harpsden through to 223 off their 40 overs.

Richardson and Poole got the All Stars off to a good steady start although they did have to survive a testing opening spell from Adam Birkett. At 45-0 after 10 overs the platform was set was for some acceleration as Shazad Gulfraz and Rod Birkett, and then Jack Roddan, combined to not just put a brake on the run rate but also make in-roads into the All Stars batting line-up.

In just eight overs, 45-0 had become 65-5 and the All Stars backs were to the wall. This brought Charlie Hill in to join Richardson and this was to prove the critical partnership. Skipper Birkett brought himself back on to break the partnership and was successful in removing Hill after the pair had put on 74 in just nine overs — Birkett ending up going for just 20 in his eight overs plus the critical wicket of Hill.

Although Richardson was bowled for 88 by Zac Jones, the Cary brothers gave the All Stars a sniff of victory but Horatio played one sweep shot too many and was well caught by Gulfraz off Heilbron as the hosts ran out winners by 39 runs.