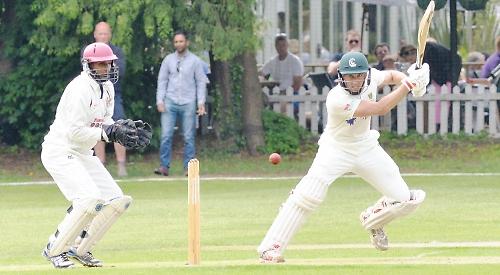 BERKSHIRE have completed a third successive season without losing a Unicorns Championship game.

The reigning champions extended their unbeaten run to an impressive 18 games (12 wins and six draws) in the Western Division with a draw against DEVON in a match of fluctuating fortunes at Exeter.

Their last defeat in this competition had come at nearby Exmouth in August, 2014, and this week’s encounter saw Devon give their rivals one of their toughest games for a long time.

Berkshire’s total of 212 — which included a top score of 75 from Henley’s Richard Morris — was their lowest in the first innings of a match this year, and left them with a deficit of 67.

Devon were bowled out for 160 second time around, leaving the visitors a target of 228 to win in approximately 58 overs.

But neither side ever looked like forcing a victory and in the end were happy to settle for a draw with Berkshire closing on 152-5 from 56 overs, skipper James Morris remaining unbeaten on 43 and Chris Peploe on 32, the unhurried pair having spent 21 overs in adding 45 runs.

Henley all-rounder Euan Woods, who has been playing for Surrey 2nds this week, and Finchampstead’s hard-hitting batsman Dan Lincoln, who has been on football duty with Bognor Town, are both expected to return to the Berkshire side for the Unicorns Trophy final against Lincolnshire at the Wormsley ground, near High Wycombe, next Wednesday (August 23) at 11am.

The same two counties will meet again in the Championship play-off at Banbury in a game that is scheduled for four days, starting Sunday, August 27. It is the second successive year Berkshire and Lincolnshire, the respective winners of the Western and Eastern divisions, have met in the three-day competition, with the Royal county winning a thriller by 28 runs at Wormsley 12 months ago.

“The fact we are playing each other again, shows we are the two strongest minor counties in the country,” said skipper James Morris. “We are looking forward to playing them again.”

This is the first time the same two clubs have met in both the one-day and three-day finals in the same season.

Head coach Tom Lambert commented: “Both sides are out to make history, so I would think we will see two great games. We are really looking forward to going back to Wormsley. We won there last year, so it brings back happy memories and we want to repeat that next Wednesday, but then Lincolnshire will be very keen to gain some revenge.”

Lambert added: “The only way we could improve on last year’s tremendous performance is by retaining the Championship title and winning the Trophy as well, and that has been our objective all season.”

If bad weather prevents the final being completed next Wednesday, then the tie will continue the following day. There will be a £5 charge at the gate. Refreshments will also be available.