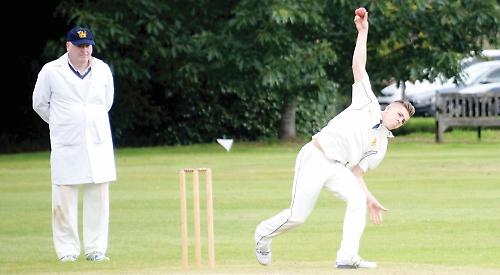 HOSTS GREYS GREEN ran out winners in an exciting low-scoring game against BBC CAVERSHAM on Sunday.

With Rooke and Ahmed swinging the ball well for the home side, wickets fell quickly and regularly and only Ramachandra was able to make a score of substance and even he was grateful for some early lives.

At 45-6 Champion and Jenkins provided good resistance, even though scoring remained slow, and advanced their team’s total into the seventies, at which stage Champion was dismissed by a one-handed catch, close to the ground, at full length, in the covers, by Pheiffer.

The last three wickets had doubled the total and BBC were all out, from the final ball before tea, for 98.

BBC Caversham defended their below-par score with tight bowling and energetic fielding and, before they knew it, Greys Green found themselves in a tricky corner, at 30-4.

Cross and Pheiffer advanced the score quickly with the aid of several boundaries from Pheiffer before he was bowled, with the score 62-5.

The outcome was still much in doubt when two more wickets fell and Greys Green were 84-7.

A couple more tense overs followed before Rooke struck Randall for a six and a four, from successive balls.

A taut, thrilling game ended with Greys Green just getting over the line but they were indebted to the sportsmanship of BBC, who loaned Greys, their 12th man, J Smith, which, just tipped the balance.