Batting collapse proves costly as Harpsden lose out to title-chasers 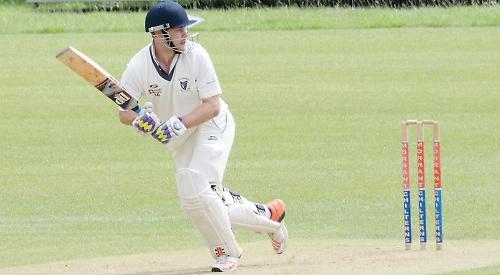 HARPSDEN lost out at home in their Division 1 clash with title-chasing BINFIELD on Saturday.

The hosts won the toss and elected to bat on a pitch that had enough in it for both sides. However, with Harpsden 7-4 off six overs, batting looked harder due to fine opening spells from the Binfield pair of T Andrews and M Hayman.

Wickets fell at regular intervals with no batsman able to stay in long enough to build a significant partnership which left Harpsden struggling at 52-9.

James Paice joined Toby Stevens at the crease for the last wicket with Stevens being the aggressor and doing what no batsman did before him. He took the attack to the Binfield bowling line-up and smashed a quick-fire 45, ably supported by Paice until he was caught at mid-on, to leave Binfield a well below par score of 115 for victory.

Proceedings started well for Harpsden with the early wicket of Ennis after a good catch at deep fine leg after a quick short ball from Ed Birkett. Binfield then built a partnership through the aggressive Morgan and Carson before Harpsden batting hero Toby Stevens produced a short, sharp spell of bowling removing both in quick succession.

With the introduction of Heilbron who picked up a quick wicket before tea, Binfield were left 64-4 with Harpsden on the attack. However, after tea A Marshall and A Higginson produced a fine partnership mixing watchful batting with attacking cricket shots to get Binfield over the line giving them a six-wicket win.

Another HURLEY collapse saw the visitors toss away a winning position at PINKNEYS GREEN in their Division 2 clash.

Having reduced the home side to 161 in 38 overs, Hurley capitulated from 106-4 to 127 all out with only Varun Sharma making light of the Pinkneys Green bowling.

Phil Ridgeway won the toss and invited the hosts to bat. Ross Brown’s second ball clipped the off stump of Will Hayes for the ideal opening over. Matt Harding proved the mainstay with some punishing batting before Ridgeway had him caught on the deep mid-wicket boundary.

Jags Dhillon looked threatening before Ridgeway trapped him lbw, the first of a wave of lbw decisions. Stokes gave Theo Patrick a trophy wicket while Umar Rashid was aggressive before the returning Brown picked him up with the first ball of his second spell. Pinkneys Green were all out for 161 in the 38th over. Imran Arshad went first over, bowled by Rashid as Hurley dug in with 24-3 from 13 overs. Jono Patrick fell to a one-handed catch at cover after a crisp boundary and Dave Simoes fell to the first of three Hurley lbw decisions.

Matt Clark held one end while Sharma started to move through the gears. These two added 51 before Clark edged to slip. Scott Taylor briefly shone as the visitors eased to 106-4.

The switch to Mo Illyas wrecked the Hurley reply. The two Taylors went in over 31, Mike Cole trapped in Illyas’ next over and then Ridgeway and Brown followed to McDonagh’s 10th over.

Sharma saw the writing on the wall, hit a straight boundary and was bowled next ball attempting a heave as Hurley were all out for 127.

HARPSDEN 2nds had the better of their drawn Division 3 clash at DENHAM.

The visitors lost the toss and were put into bat on a surface that gave significant help to the bowlers early on having sweated under covers, but 23-4 in the 11th over was worse than the pitch warranted as three of the dismissals were the result of rash shots.

Mark Cooper and Tom Mitchell set about the re-building process which necessitated a defensive approach, which included a 14 over spell that only yielded 10 runs. The score of 41-4 after 26 overs gave Harpsden a lot to do in the second half of their innings and although Mitchell and Cooper, and then Horatio Cary, pushed the score along, when those three had been dismissed, Harpsden were 98-7 in the 41st over, and well short of any defendable total.

Matt Stanley succumbed early and although Shazad Gulfraz gave Jon Stanley some support the innings had faded to 119-9 at the end of the 46th over. At that stage Rod Birkett came in to join Jon Stanley and the two of them put on 36 in the last six overs before Jon Stanley was lbw for 48 to the last ball of Harpsden’s maximum of 52 overs.

Denham needed a steady start to ensure an easy run to victory as by this time the sun was out and batting had become considerably easier although that was not to be as Harry Williams bowled a devastating opening spell, supported by the economical Birkett at the other end. At 23-4 after 17 overs, all the wickets falling to Williams, Harpsden felt they were back in it although even after this dreadful start Denham still only needed to score at just over four an over.

Following a run out, brought about by a good bit of fielding by Horatio Cary and a peach of a ball from Tom Mitchell that removed Marchant’s middle stump, Denham had slumped to 41-6 after 25 overs.

Gahunia and Javed provided the steel to the Denham batting and put on a good 75 for the seventh wicket before Cary had Javed stumped.

However much Harpsden pushed for victory, the lofted shots just wouldn’t go to hand, the lbw appeals were turned down and there were numerous plays and misses. A winning draw for Harpsden seemed scant reward for the batting of Stanley and bowling of Williams.

With both sides reduced to 10 men by late drop-outs, the visitors won the toss and asked the hosts to bat first. Hurley were soon in trouble with Kuldeep Nothey edging John Magner to Ambrose Treacy at slip in the fourth over.

Yasir Gul only lasted two deliveries, falling to a juggled catch in the gully by Danny Dawson. With Abdullah Ali edging to slip and Jeff Dawson losing his off stump to an away swinger from Jack Tomlinson, Hurley were in trouble at 15-4 after only 11 overs.

Josh Cole looked to be in good touch before poking a tame catch back to Magner. Matthew Addison and Oscar Bean staged a bit of a recovery with a stand of 29 in 11 overs with both batsman showing a maturity and technique beyond their years.

Tamul Siddiq produced a good delivery to shave the off stump of Addison at 59-6. Mike Walton joined Bean in the middle and the batsmen set about rebuilding the innings with a partnership of 77 from 18 overs.

Walton combined solid defence with punishment of anything loose, while his diminutive partner did the same. Having reached a second batting point in the 48th over, the batsmen looked to try and accelerate. Walton paid the price, bowled going down the track to Tomlinson, leaving Nigel Haines to add a further 18 runs with Bean in the remaining three overs to take Hurley to 154-7.

The Denham reply got off to a solid start with a 27-run partnership between Josh Simpson and Danny Dawson. Addison made the breakthrough for Hurley in the sixth over, with Dawson chipping to Gul at mid-wicket.

With Nothey suffering from injury he was withdrawn from the attack after only two overs and replaced by Haines. Addison took the new ball after half a dozen overs and immediately picked up the wicket of Simpson, clipping the top of off stump as the batsman attempted a cross batted swipe.

Haines bowled well without success and was replaced by Bean who dismissed Treacy with a wide full toss which was well caught at extra-cover by Josh Cole, diving to his right. Ansuman Swain and Siddiq did well to survive against a hostile spell from Addison, who passed the outside edge on numerous occasions with neither batsman looking comfortable. Hurley rotated their bowling but were unable to pick up any more wickets as the batsmen grew in confidence, easing to victory with 14 overs to spare.