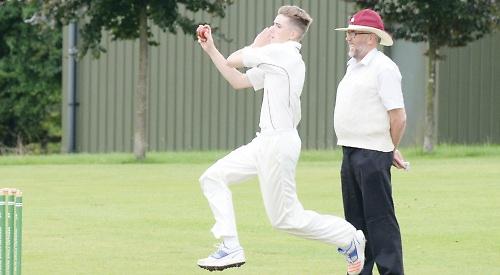 The visitors made a dream start after putting the hosts in to bat, Alfie Clifton (2-29) collecting two wickets in his first over courtesy of a fine catch in the gully by Olly Nicholson and a diving caught and bowled.

Dan Bird and Camels skipper Adam Birch knuckled down until the former was bowled with the final ball of Hopper’s spell, a deserved victim in a stint of 1-26 from 12 overs.

Nicholson and Sam Fooks bowled economically in the middle overs as the hosts reached 100-3 after 31 overs, but the introduction of Perkins heralded a spectacular collapse. He had the dangerous Birch caught at long off by Dion Sampson for 54, and then carved his way through the middle and lower order during a wonderful spell of 4-15 from six overs. At the other end, Sampson – aided and abetted by a magnificent Michael Chard stumping – took 1-25 as the hosts closed on 146-9.

Peppard Stoke Row’s reply started badly despite a useful knock of 24 from Paddy Hennessy, and at 72-6, the home side would have been favourites.

However, skipper Richard Ashton (40 not out) was joined by the free-hitting Hopper (51 not out from 33 balls) in sharing a match-winning stand of 59, the winning runs – a Hopper boundary – securing both his first 50 and an extra batting bonus point for the visitors.

Elsewhere in the division WOODCOTE had a day to forget when they visited bottom-of-the-table WOODLEY.

The visitors won the toss and made some early inroads before Shakeel Bashir and Kashif Ali launched a damaging offensive which saw the home team finish their innings in a commanding position on 271-8.

After tea the Woodcote batsmen failed to come to grips with some hostile and accurate bowling from Kashif Ali and Jag Grewal and lost the match by a large margin in 22 overs.

PEPPARD STOKE ROW 2nds climbed out of the Division 1 bottom two with a winning draw at home to GORING. The hosts lost Dan Bacon for 10, but a 115-run second-wicket partnership between Gerry Bacon (57) and Richard Walker (90) provided the backbone of Peppard Stoke Row’s 212-6, Charlie Laing adding 19.

Elsewhere in the division CHECKENDON ran out winners at home to BRADFIELD.

The hosts chose to field first in damp conditions and restricted Bradfield to 152-9 after the visitors had at one point been 102-2.

Captain Vikas Chib led from the front with 4-36 in 11 overs for the home side whilst Will Nevill was undefeated on 32 at the close of the innings.

Checkendon’s reply began badly with two early wickets but a stand of 82 between John Acland-Hood and Ash Telreja put them on track. Ravi Vedanthappa contributed a vital 24 but when he was dismissed with six runs required and two wickets standing the game was too close to call.

The ninth wicket fell with the scored tied before last man Alex Podolski glanced his first ball onto the leg side and scrambled a single with Preshant Panwar to give Checkendon victory.

Hugh Asquith (44), Don Townsin (53) and Rob Simmons (61 not out) were all among the runs as Peppard Stoke Row 3rds totalled 204-4 from their 40 alotted overs, U18 Alfie Jordan chipping in with a brisk 16 late on in his first game of the season.

Peppard Stoke Row 3rds
started with the left-arm spin combination of Matt Kimber (0-29 off eight overs) and Ian Jordan (1-20 off eight), and tightened the screw from the outset.

U14 Owen Simmons (3-24) once again displayed what a bright future he has in the game and with
captain Rob Dyer also bagging 1-23, the writing was on the wall for Binfield.

The experienced Asquith bowled an over of ragging off spin to claim 2-0 before Dyer took his star bowler off, allowing both Charlie Jordan (1-6) and brother Alfie (1-13) to ensure Binfield could only reach 119-9 in reply.