Oldershaw in fine form as side eases relegation fears 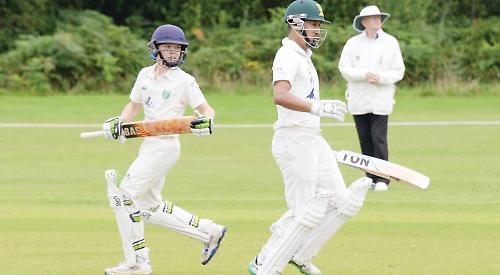 OPENING batsman Tom Oldershaw hit an unbeaten 77 runs as HENLEY 2nds recorded their fifth win of the season to pull further away from the Division 1 relegation zone at home to MARLOW last Saturday.

The hosts won the toss and put their local rivals into bat at the Brakspear Ground.

Marlow were soon in trouble at 23-3 before Mark Quamil and Nick Paskins put on the visitors’ best partnership of the afternoon. Once Quamil was out for 31 the visitors had moved onto 95-4. Paskin fell for the seventh wicket having put on a half-century to leave Marlow on 144-7.

The next three batsmen managed to put on another 12 runs between them before the visitors were all out for 156. Henley’s Euan Brock returned figures of 3-37 while Simon Wheeler and Rob Kenworthy both took two wickets each.

In reply Alex Gill was out for a duck but fellow opener Oldershaw kept his wicket throughout the innings as he posted the best knock of the day that included eight fours and two sixes. Henley never looked in any real trouble as Charlie Homewood joined Oldershaw with the score on 104-5 and the duo put on a 53 run partnership to see the hosts home on 157-5 off 40.5 overs.

KIDMORE END’S Division 2A promotion hopes took a knock as they went down to a 106-run defeat at MAIDENHEAD AND BRAY.

Losing the toss Kidmore End were asked to field first and got off to a good start as Frost took a wicket in his first over and the first third of the game saw the visitors on top.

However, the ball became softer and batting became easier. There was a short boundary of no more than 45 yards on one side of the pitch and batsmen number nine, Alkesh Vaja, chanced his arm as he struck three sixes. Well supported by his captain and partner, Louis Blackwell, the pair put on 85 runs in the key partnership of the game.

This helped Maidenhead and Bray to 252-8. This was only five an over but the Kidmore top order were unable to keep out the fine bowling of openers Grove and Becker.

By the 12th over Kidmore were 46-5 and in a difficult position from which to recover. Frost and Leonard showed some resistance for the sixth wicket as together they put on 50 runs, running well between the wickets with Leonard playing a number of classy shots before he was dismissed for 35.

It was the bowling of Blackwell that cleaned up the tail. He took five wickets with three people caught at deep mid-wicket playing the same shot. Frost held out to score 31 runs but the side collapsed to 145 all out in 38.5 overs.

League leaders WARGRAVE closed in on promotion from Division 3A despite being held to a draw at COVE 2nds. Batting first the hosts put on 204-6 off their 52 overs with John Clark and Will Allum both taking two wickets each.

In reply Wargrave could not keep up with the required run rate as they lost wickets regularly and eventually held on to claim a share of the spoils with one wicket in hand as they closed on 188-9.

HENLEY 3rds maintained their Division 5B promotion push thanks to an 81-run win against FALKLAND 3rds at Nettlebed. Batting first the hosts were bowled out for 199 with Connell top scoring with 59 and Hopkins and Johnson chipping in with 42 and 35 runs respectively.

In reply Taylor took 4-16 as Falkland 3rds were bowled out for 118. Trist also impressed with the ball as he finished with figures of 3-28.

Elsewhere in the division WARGRAVE 2nds went down to a three-wicket defeat at home to BOYNE HILL 2nds, a result that leaves the hosts just two points above the drop zone.

Wargrave, batting first, were bowled out for 105 with the visitors posting 108-7 to win the match. Razwan Hanif impressed with the ball for the hosts as he finished with figures of 5-32.

KIDMORE END 2nds claimed a much needed Division 7A win on at home to EVERSLEY 3rds as they consolidated their third position in the league. A top four finish is required so the Gallowstree Common side do not end up being relegated in next year’s reorganised league.

Kidmore won the toss and decided to bowl. Eversley’s opening batsmen weathered an early good spell of bowling from Azhar Udeen and Nathan Ruegg and were looking comfortable until Udeen made the initial breakthrough by bowling Jon Last with the score on 36.

Eversley lost a further two wickets on 36 with Udeen getting another and Elliot Glass taking one with his first ball courtesy of a good catch. Eversley then lost a further wicket and at 40-4 the home side were in the ascendancy. However, the visitors rallied and added a further 40 runs with the next wicket falling at 80 again to Glass off the first ball of his second spell.

Thereafter only Rob Saunders offered resistance as the Kidmore bowlers, led by Udeen, worked their way through the Eversley lower order with wickets falling to both Udeen and Glass and it was fitting that Udeen collected the last wicket and in doing so gained his fifth to finish with figures of 5-27 and Glass with 3-30 as the visitors were dismissed for 140 in the 44th over.

The Kidmore reply was built around an opening partnership of 80 between Chris Pigden and Mark New as they both mixed attack and defence well and broke the resolve of the visitors.

Pigden was dismissed by Jess Board for a 44 containing eight boundaries and New continued with his good form as he steered the Kidmore ship home to finish with 78 not out as the home side won in the 32nd over and gained themselves victory.

In Division 9A KIDMORE END 3rds lost out to YATELEY 4ths by 93 runs.