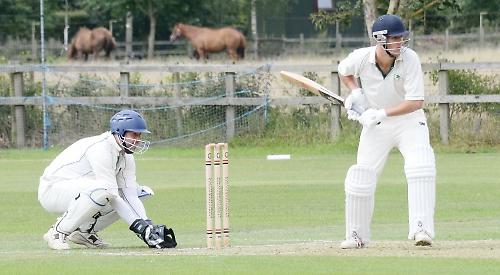 OPENING batsman Tom Oldershaw was in fine form for HENLEY 2nds as the visitors ran out four-wicket winners at STOKE GREEN in last Saturday’s Division 1 clash.

The hosts, batting first, put on 203-8 from their allotted overs with Simon Wheeler taking 3-31. In reply Oldershaw hit 63 runs as Henley exceeded the home side’s total to put on 204-6 and win the match with three overs remaining.

KIDMORE END were blown away by WINDSOR in their Division 2A encounter at Gallowstree Common. Having won the toss Kidmore batted first on what was a slow yet true pitch. It was not the pitch that did for Kidmore End but the significant swing, demonstrating accurate and skilful bowling by the Windsor side.

Adam Allen-Turner, Ollie Jordan and Thomas Hartridge all bowled accurately maintaining an immaculate length through out. Jordan was the pick of the bowling, he moved the ball late away from the right handers and bowled 10 overs without any loose deliveries and finished with figures of 10-7-7-4.

The most resistance shown from Kidmore came from Calem Taylor, who was bowled with an unlucky inside edge that dragged the ball from four feet wide of his stumps back onto them, and the Frost brothers, who put on 23 runs for the last wicket. Had extras not helped out with 30 runs the situation would have been even worse for the hosts who were all out for 88.

It took Windsor little time to knock the runs off as the opening pair Kristan Baumgartner and James Hawkes savagely attacked the bowling. Only Taylor managed to bowl a maiden and Umer Faroqi, who took a wicket, came out of it with some form of positive as Kidmore End lost by nine wickets.

WARGRAVE’S Division 3A title hopes took a knock as they were held to a draw at home to lowly CHISWICK AND WHITTON.

Having lost the toss and being put into bat first WARGRAVE went on to post 231-7 with Chris Lunn top scoring with 60. In reply the visitors held on as they posted 209-8 with Neal Robinson taking 3-62.

HENLEY 3rds slipped down to third place in Division 5B after losing out by 52 runs at BRACKNELL.

Batting first, the home side posted 129-9 with both Sean Taylor and John Neville taking three wickets each. However, in reply Henley were dismissed for just 77 runs.

Elsewhere in the division WARGRAVE 2nds narrowly lost out by one wicket at MAIDENHEAD AND BRAY 2nds. Batting first Wargrave posted 185-9 with W Moss top scoring on 50 not out. In reply Maidenhead reached 187-9 to win the match with R Hannit taking 5-73 for the visitors.

KIDMORE END 2nds remain in third place in Division 7A after they ran out 94 run winners at THATHAM TOWN 3rds.

Batting first Kidmore End posted 211-5 declared with Chris Pigden top scoring with 72 and Tom Bodeker chipping in with 61. In reply Thatcham were bowled out for 117 with Finn Russell taking 4-15.