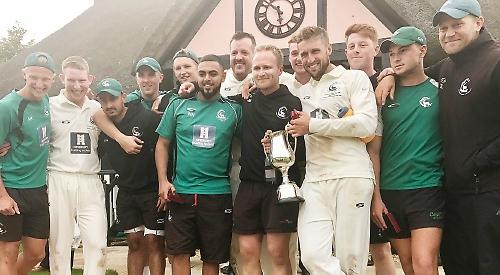 They lifted the Unicorns Trophy with a four-wicket victory over Lincolnshire at Wormsley on Wednesday and now have their sights on winning the Unicorns Championship title when they take on the same opponents at Banbury in a four-day game starting on Sunday.

Skipper James Morris said: “No county has won the two competitions in the same season, so we are aiming to become the first.”

His side will start favourites to complete a quick double, having beaten Lincs in the final last year when it was played at Wormsley.

So it was a happy return to the Getty family’s private ground in the Chiltern Hills this week.

In front of a crowd of close to 1,000, Berkshire restricted their hosts to 245-5 in their 50 overs and went on to reach their target with more than nine overs to spare.

On an overcast morning, Morris won the toss and elected to field first. Ollie Wilkin, in the second over, and Waqas Hussain, in the 13th, dismissed both openers for 11, but Matt Lineker and Conrad Louth started to push the score along, adding 58 for the third wicket which fell at 115 in the 24th over.

The fourth wicket went down at 125 in the 27th over, but Lough and Adam Tillcock accelerated the scoring rate even more, adding 96 in 21 overs.

Hussain ended the partnership by bowling Tillock for 51 in the 48th over, leaving Louth to remain unbeaten on 94, of 103 balls, when the innings closed on 245-5, 88 runs having been added in the last 10 overs.

Hussain took 2-51 off five overs, but the best bowling figures came from spinner Ali Raja, who conceded just 27 runs of his 10 overs, including a wicket thanks to a brilliant catch by Tom Nugent close to the deep mid-wicket boundary. When Berkshire replied they lost Wilkin for five, but Hussain and Euan Woods quickly set about improving the situation, with Hussain producing some particularly classy strokes, only to be dismissed when one short of a half-century.

Woods was lbw for 13 and four balls later James Morris was caught behind for a duck, leaving the game evenly balanced at 79-4 after 16 overs.

However, Berkshire then took control with Richard Morris and Andy Rishton putting on 56 in nine overs before the latter was out for 21.

Amazingly, it took the unbeaten Western Division champions just another three overs to seal victory with Peploe taking advantage of some indifferent bowling to smash 35 off just 14 deliveries.

There was some consolation for the beaten Lincolnshire team as Louth was voted man of the match. He recently moved to Berkshire to work and will be playing for
Finchampstead in the Home Counties Premier League next season.