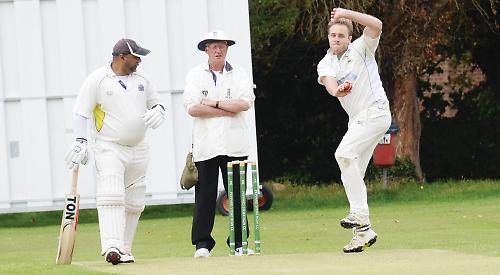 PEPPARD STOKE ROW produced a fine team performance to down RUISLIP VICTORIA by 10 wickets in their Premier Division clash on Saturday.

The visitors won the toss and chose to bat at Peppard Common, but their top order was undone by the in-form combination of Matt Hopper (2-22) and Alfie Clifton (3-33), the latter dismissing the dangerous Kashif Maan with a pearler which swung late to knock back off stump.

Sufian Sanik (30) and Zeb Ahmed (21) tried to salvage the situation and shared a useful sixth-wicket partnership, but off spinners Dion Sampson (2-34) and Dan Hayden (3-19) worked their way through the lower order as the visitors were dismissed for 114.

While three catches went to ground off the bowling of Sampson – none of them regulation – it was an otherwise fine display in the field from Peppard Stoke Row, led by a good performance behind the stumps by Michael Chard, and they went on to record their seventh victory in their last nine completed games.

That it proved to be so facile owed much to the quality of Andy Watts (32 not out) and Fergus Nutt (74 not out from 71 balls), as the pair negotiated a testing 10-over spell before tea was taken and then pushed on after the interval to secure the win in 21 overs.

Another WOODCOTE batting failure was at the root of their eight-wickets defeat by CROWTHORNE AND CROWN WOOD.

Ryan Lennard’s fine innings was the only worthwhile contribution as the home side were bowled out in 38 overs, with Anthony Cluett and Ravi Godbole the most successful bowlers for the visitors. Lennard’s was the eighth wicket to fall with the score at 117. All five Woodcote bowlers bowled well enough in the second innings but a century partnership between Anthony Cluett and Mike Brundish saw the visitors to victory in 30 overs.

A depleted PEPPARD STOKE ROW 2nd side were beaten by seven wickets at title-chasing EMMBROOK AND BEARWOOD in Division 1.

On an uncovered wicket offering copious assistance for the bowlers, the hosts won an important toss and inserted the visitors.

Mark Cobb (3-12) and Richard Cole decimated the top order, with opener Rob Simmons and Brett Everett trying to fight back until the latter got a ball which shot along the floor.

U14 Daniel Watts, Carl Hvass and captain Rob Dyer – who top scored with 16 – tried their best to fashion a competitive total, but Peppard Stoke Row were ultimately shot out for a mere 68 in 31.5 overs as Callum Marshall (2-10), Sami Rahman (2-18) and Sean Woodward (2-19) also took advantage of the bowler-friendly conditions.

Dyer (2-28) and impressive U14 Owen Simmons (1-31) did make a trio of early breakthroughs, but Asim Zaka (32 not out including three maximums) led a counter-attack which hustled Emmbrook to victory in only 14.5 overs.

Chris Walsh hit 133 runs as hosts GORING had the better of their drawn match with WEST READING 2nds.

Having won the toss and electing to bat first Goring put on 301-6. In reply West Reading ended their innings on 218-8.

Having opted to bowl first CHECKENDON reduced hosts FARLEY HILL to 80-6 in the 28th over thanks to three wickets for Vikas Chib and tight spells from Mudouis Khan and Alex Crawford.

Nick Timms came to Farley Hill’s rescue with an aggressive 82 not out which included seven sixes and he shared an unbroken 105-run stand with Johan Vorster, taking the total to 185.

Checkendon lost two early wickets in reply but Manpreet Singh was in imperious form, hitting 102 not out with good support from Sam Arrowsmith as the visitors reached their target with 14 overs to spare and six wickets in hand.