Bevan hits boundary to secure a memorable victory for home side 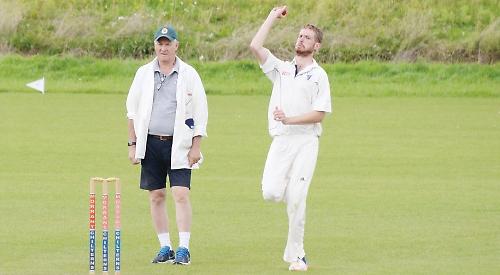 The match was preceded by a moment’s silence for White Waltham umpire Geoff Dale who sadly passed away on Thursday.

Visiting skipper Chris Metherell won the toss and decided to bat on a wet-looking wicket.

Harpsden skipper Johnny Wright opened the bowling with Ed Birkett with both passing the bat frequently in the early overs. The hosts were denied a perfect start when Wright dropped opposite number Metherell in the gully with the visiting captain on 0. Metherell then went on to score 124 not out to anchor his side’s innings.

Metherell’s opening partner Andy Elliot rode his luck for 62 with the pair putting on more than 100 for the first wicket. Drinks were taken with White Waltham 110-0 after 26 overs with Haprsden requiring a big shift in the field to claw the match back.

The team responded well and the resulting pressure helped Wright to bowl as he went for one big shot too many. Dan Molloy’s quick 23 threatened to take the game away from Harpsden before he was trapped lbw, also off Wright.

Harpsden rotated the bowlers with Will Stevens’ spell key, removing Ben Scarborough (11) and Jonathan Mahoney (0) in quick succession. He and Ollie Heath bowled well in tandem to restrict White Waltham to only five boundaries in the last 10 overs, leaving Harpsden 240 to win from their 48 overs.

Harpsden’s lost early wickets once again as Jack Brown (1) fended a ball from Rahul Mohineru to the keeper in the fourth over.

Adam Birkett joined Watson at the crease and after a solid partnership of 23, Watson was deceived in the flight from Luke Beard, offering an easy return catch to the bowler.

Adam Hurst looked in fine form before a spectacular catch from Scarborough at mid-on ended his innings before he was able to kick on further. Birkett was continuing untroubled at the other end and with Sam Imlay joining him the two started to turn the match back in Harpsden’s favour.

Adam Birkett’s two sixes were the highlights of his 50 before he was caught going for one too many. Imlay took over from where Adam Birkett left off, driving and sweeping with composure on his way to a well made 70. His partnership with Liam Eslick again regained some stability into the innings before the latter was caught, once again off the bowling of Beard for 17.

Will Bevan was promoted from 11 to eight in order to give the innings some impetus and he responded fantastically, choosing when to attack and when to rotate the strike expertly on his way to a rapid 42 not out, including a perfectly played switch hit for four.

After Imlay was dismissed Wright rotated the strike to ensure the in-form Bevan could continue his destruction at the other end.

With eight required off the last over, all results were still possible. Bevan did not flinch as a full toss was dispatched to the boundary first ball and a two scampered off the second. As the field came up with two for victory, Bevan calmly slotted the full ball for a one bounce four over the bowler’s head to complete a memorable victory.

HURLEY ran out 21-run winners at AMERSHAM HILL in their Division 2 encounter.

With players arriving late the game was put back to a 12.45pm start with Hurley winning the toss and electing to bat.

Hurley opened with Phil Ridgeway and Mike Walton. Ridgeway clipped two boundaries off his legs before being bowled attempting a third. Walton was resolute as Ian Dawkins survived an easy chance at cover to then hit the ball fluidly before falling at extra cover with the score on 43 from 17 overs.

Walton fell two overs later as the Hurley innings became becalmed. Varun Sharma had just begun to move up a gear when Jordan Richardson-Hill had him lbw and two balls later, Shabob Riaz was bowled off his pads.

At 80-5 and 29 overs gone, the visitors were staring at another insipid batting performance. Jono Patrick and Matt Clark added 53 in 12 overs and when Patrick departed, Clark started to hit through the ball with power. His 70-ball innings added an impetus that saw the second hundred come up in 15 overs, and the last 50 in four overs. Needing 16 for his ton in the last over, two crisp boundaries came with the third and fourth balls then a marginal wide was not given and a dot put paid to his century. Hurley closed their 52 overs on 251-7.

Hurley opened with the pace of Riaz and the swing of Dawkins, but Riaz bowled 15 no-balls and five wides stretching for that added pace which contributed to 48 extras conceded. With extras top-scoring for much of the first 10 overs, Amersham had momentum at 59-3 from 10 overs.

Dawkins’ out-swing trapped Cooper lbw, had Etheridge edging to slip and skipper Oldfield slicing to cover. Ben Laybourne and Pathmarajah proved punishing adding 44 in eight overs before Dawkins picked up his fourth to a neat catch by Mike Walton.

Pathmarajah’s hitting was looking ominous for the visitors as Amersham kept up with the required rate. The next 60 took 13 overs before Imran Arshad had Richardson-Hill skying to mid-wicket where Henry Graham took the catch.

Pathmarajah was out in the 40th over when Riaz pouched a catch at deep mid-wicket off Ridgeway to leave Amersham needing 55 from the last eight overs.

Dave Goodman was deployed to mop up the tail with the last four wickets falling in five overs, Dawkins picking up his fifer as Netarajan hit his first ball for six then sliced to point where Joe Graham took the catch.

Goodman finished the match but missed out on a debut hat-trick in the 47th as Essex drove to mid-off for Sharma to take his third catch of the afternoon. Hurley took three-and-a-half hours to bowl 47 overs as the match ended in dusk at 8pm.

Due to the rain on the previous day the toss was again going to be important and this was won by the home skipper who had no hesitation in asking Harpsden to bat first on a pitch that had sweated under covers.

With Ayres and Cross bowling good areas, Harpsden were under pressure from the seam movement for the first hour. The visitors were struggling at 46-5 after 20 overs with captain Sasha Burgess being the only one who managed to survive the first testing hour.

As the ball softened and the sun did its work on the pitch, batting became easier as Burgess or Malcolm Lidle-Grainger, making his Harpsden debut, batted sensibly.

Burgess successfully put away the bad balls as the score moved to 105 before he was caught at mid-off. Lidle-Grainger batted cleverly with the tail and had good partnerships with both Jon and Matthew Stanley, which helped Harpsden get up to a barely defendable 155 in just over 50 overs.

Chalfont St Giles came out to bat against the old ball, which was taken by Shazad Gulfraz and Horatio Cary. Gulfraz took a while to settle into his length but when he did, he became difficult to get away.

Rajesh Patel rode his luck on his way to a swift 43 until he was well caught by Mark Cooper at square leg but he had been preceded by Wood who played across the line to one that straightened from Cary and caught the leading edge and Tom Payne who was bowled by a peach from Gulfraz that pitched on middle and took the top of off.

At 73-3 in the 20th over, the hosts were coasting towards a comfortable victory before Rod Birkett made it 82-6 within four overs. Two of the wickets were courtesy of good catches from Tom Mitchell and Cooper whilst the other cut back and clean bowled Alex Jackson.

Harpsden could not split the last pair despite a good spell of seam bowling from Cary that went unrewarded despite beating the bat a couple of times each over.

A controversial umpiring decision, a missed run out and a difficult dropped catch also contributed to the change in momentum and Alex Heaney and Paul Plested were able to hit themselves to victory.

A gulf in quality between HURLEY 2nds and PINNER 2nds was evident in the Division 4 clash that saw hosts Hurley salvaging a draw with depleted resources.

Shorn of regular players due to holidays and first team call-ups, Hurley skipper Nigel Haines lost the toss and was asked to field.

The Pinner innings started catastrophically losing Rob Fells in the first ball of the second over, bowled by Abdullah Ali. Wasim Khan looked to accelerate early before also being bowled by an away swinger from Ali, just clipping the top of the off-stump.

With Hurley light on bowling, Simon Pilsbury and Saj Khan rebuilt from 18-2 to take the score past 100 in the 21st over; Khan in particular was brutal on the leg-side against anything short or too full and the two added 83 before Pilsbury was caught down the leg-side by stand-in keeper Mike Cole off the bowling of Alex Williams.

Hurley rotated the bowling to try and break the unbroken fourth wicket partnership of 146 between Khan and Cyrus Barrett, both batsmen playing some lusty blows and a little luck as several balls fell safe.

With fielders wilting the run-rate accelerated later on, with Nally Fernando, the Cole brothers and Haines coming in for some punishment, to allow the declaration at 247-3 off 45 overs.

Hurley’s innings also started badly with Josh Cole falling in the fifth over, bowled by an in-swinging Yorker off Lakhia. Clive Williams and Yasir Gul added 86 in 16 overs, Gul being especially fortuitous and having been dropped twice was finally caught at midwicket off Bonneywell.

Williams fell shortly afterwards bowled through the gate by Amriwala. James Calliss was bowled by a flighted ball from Bonneywell and Mike Cole adjudged lbw.

Hurley were never likely to chase down a score approaching 250, and once Cole departed at 127-5 it was left to Ali and Fernando to salvage the draw.

With attacking fields Ali mixed solid defence with brute force and it took a good catch in the deep off Pilsbury to end his stubborn innings with eight overs to play.

Despite Pinner mixing up their bowlers, Fernando and Liam Cole safely held out, the younger Cole revelling in his new role. In the final over as Hurley needed one run to secure an additional batting point, Fernando was almost run out off the last ball, but Hurley ended up on 175-6.