Knox in runs and wickets as Woodcote stroll in park 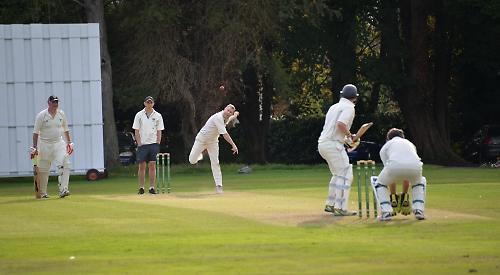 MATT HOPPER produced an extraordinary innings to inspire PEPPARD STOKE ROW to a 117-run victory away at CROWTHORNE & CROWN WOOD in the Premier Division.

A top order collapse on a wicket offering assistance left the visitors 24-4 after 13 overs, before Paddy Hennessy (40) produced a well-constructed rearguard action.

However, with skipper Rich Ashton and Michael Chard also falling cheaply, PSR were 60-6 before Hopper — playing his penultimate league game before moving to Australia — ran riot. He struck nine sixes during a match-winning 99 not out from just 82 balls, batting in a manner which belied the difficulties of the rest of the side and leading PSR to 196.

The CCW reply never got going after Alfie Clifton produced a magnificent opening spell, bowling 12 overs off the reel in claiming 6-12 to reduce the hosts to 27-7.

Clifton could not be kept out of the action as he then held on to a regulation catch at mid off off of Dion Sampson, and with young leg spinner Josh Perkins then trapping Ravi Godbole lbw before taking a quite sensational caught and bowled to account for Jeff Cluett and win the game, the home side were shot out for just 79.

After being put into bat, Woodcote struggled against tight bowling and were in some trouble at 79 for 4. But a sparkling innings from Paul Knox turned the tables and he received good support from Jonny Clark in a partnership worth 77 runs as Woodcote passed the 200 to achieve full batting points.

The evergreen Ian Herrington (5 for 27) was the pick of the Welford bowlers and Tom Fogden (3 for 30) also bowled a good spell.

Woodcote used the old ball to good effect at the start of the second innings and soon had Welford struggling. Skipper James Worsfold’s off-spin was particularly difficult to handle and his eleven over spell saw him take 5 for 20. When the new ball was taken, man-of-the-match, Paul Knox weighed in with 4 for 27.

The Welford last pair did their best to hold out for the draw, but the final wicket fell in the 41st over to give Woodcote a well-deserved win.

In Division one, CHECKENDON openers Manpreet Singh and John Acland-Hood put on 113 in only 18 overs to give their side a dream start at IBIS/MAPLEDURHAM.

Accurate bowling from the home team brought them back into the game but a well-judged 49 from Alex Crawford and a rapid 34 not out from Vikas Chib took Checkendon to 246-8.

Ibis also achieved a fast start, although it soon became apparent a big score from batsman Dave Drury would be their route to success. His dismissal by skipper Chib left the home team fighting for a draw in the face of a dynamic spell of left-arm spin from Crawford, who finished with figures of 4-15 in 12 overs.

Experienced former Ibis opener Mike Thomas held the tail together with an undefeated 30 as the game ended with Checkendon unable to claim the final wicket.

GORING were comprehensively beaten away at EMMBROOK and BEARWOOD.

Having won the toss the visitors elected to field but the hosts started positively with openers Sanjeev Jain and captain Andy Webb making 22 and 24, respectively, before falling to the bowling of Peter Slade. Jain was caught by Donovan Norman while Webb had his stumps rearranged.

Gary Niederheitman kept up the pressure by trapping Alex Cobb leg before wicket for four runs and providing a catch to Adam Ellis to dismiss Alistair Fairhead for six runs.

But Sean Woodward did well to counter-attack, hitting 35 runs from 24 balls with six fours and a six, before being bowled by Adam Ellis.

Niederheitman then got wicketkeeper Tom McNelly for four, caught by Slade and George Taylor bowled Matt Dozier for a first ball duck.

Richard Cole steadied the ship with 41 runs from 76 deliveries, staying not out for the innings, supported by Matt Howarth, who made 29 before being caught by Brownlee, off Taylor.

In reply, Goring’s innings never really got going with bowlers Mark Cobb and Cole picking up nine wickets between them at regular intervals.

Openers Palash Banerjee and Brownlee hit nine and four runs before being bowled by Cobb while Niederheitman suffered the same fate with a first-ball duck.

Taylor at four was the only recognised batsmen to reach double figures with 17 before he was bowled by Cole.

Cole picked up the next two batsmen, Matt Norman and Nikhil Kulkarni, with each losing their stumps without troubling the scorers, facing just three balls between them.

Wickets continued to fall cheaply until Stephen Wincott, in at number 11, made a valiant 13 of 31 balls before he too was bowled, but by Andy Webb.

The 10 men of PEPPARD STOKE ROW 2nds recorded a memorable winning draw at home against league leaders MORTIMER WEST END. Having lost a player late-on due to illness, skipper Olly Nicholson opted to post a challenging total by electing to bat first on a good wicket at Peppard Common.

The move paid off early as the visitors’ ill-disciplined bowling attack gave away numerous byes and no balls and the hosts raced to 80-2 off 15 overs.

Marcus Laing made a solid start before being undone by a late swinging delivery from Ian Wise. Dom Hall and Nicholson then retained the early momentum by taking advantage of several dropped catches with good running between the wickets.

Once Nicholson was eventually caught at extra cover for 37, Charlie Laing then played a superb cameo role in supporting Hall as the pair brought up the visitors’ 200 — Laing’s reverse-sweeping being a highlight of the innings.

Mortimer’s Nick Kingston then returned for a final spell and removed the remaining four Peppard batsmen, ending the innings 224 all out in 44.3 overs with Hall’s knock of 67 providing the backbone.

Peppard opted to take the old ball after tea and the decision helped restrict Mortimer’s progress as runs were difficult to come by. The first wicket fell when Taylor Vines swooped from cover to run out Jason Searancke after some indecision from the batsmen.

Nicholson’s left arm swing then took two quick wickets to peg the visitors back further. The second was courtesy of a superb low diving catch by Vines at point.

Chris Proudfoot bowled a tight seven-over spell from the pavilion end to maintain pressure on the visitors and then Vines’s second spell proved decisive as a sharply spinning delivery clean-bowled the dangerous Kingston to leave Mortimer four wickets down and well behind the required run-rate.

Matt Kimber bowled a probing eight-over spell taking three wickets, including a diving caught and bowled, to put the game well beyond the visitors’ reach.

A direct hit run-out by Hall from deep point then sealed the winning draw for Peppard as Mortimer’s innings closed on 194-9 off 45 overs.

In Division 3, a captain’s innings from Robbie Dyer inspired PEPPARD STOKE ROW 3rds to a three-wicket win over BRADFIELD.

But it was Bradfield that started the better of the two sides with Jon Bartlett, scoring 32 runs, Alex Bartlett, 34, and Chris Jones, 32, piling on the runs.

But Peppard hit back through the evergreen Mick Chard, who returned figures of 4-17, and under-19 player Alfie Jordan, whose left-arm spin brought him four wickets, conceding just 15 runs, which helped to bowl out the home side for 157.

In reply, Peppard lost three early wickets before Hugh Asquith and James Hern settled the ship. Asquith was caught for 28 which led to the side collapsing to 91-7.

But Hern and and Dyer, who ended the innings 43 and 33 not out, respectively, showed their class, to ensure the win. Victory opens the door to a possible sixth-placed finish if they can get a positive result against Knowl Hill in their next game.