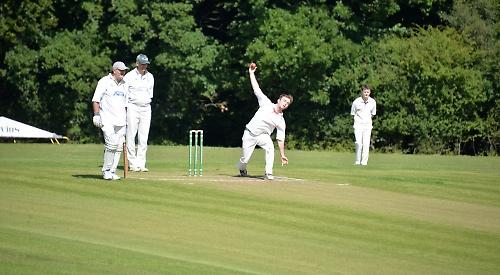 Peppard lost a couple of early wickets as Chris Lee was adjudged leg before wicket and Alan May was caught, but under-14 duo Owen Ravden and Ed Atkinson helped steady the ship at the Les Clark Oval.

Matt Ravden provided some support, but it was Nicholson’s 58 which proved pivotal in the Mahas amassing a defendable score, with Under-13s Nathan May, Nicola Lee and Ed Handley all providing useful cameos at the bottom of the order.

With Dave Foster taking 3-29 and Vince Sheehan 3-47 the pick of the attack, the Maharajas were dismissed for 157 in 37 overs.

Markland Tidswell was in blistering form at the top of the Sonning Common Village order as they began their reply with gusto, but Handley bagged himself a wicket during a spell of 1-12 from four overs.

Matt Ravden ran through the middle order as he collected 4-20 from his eight overs, including the dangerous Tidswell for a fine 55, while Chris Lee also picked up a wicket, conceding just eight runs off his three overs.

Owen Ravden continued the family affair with figures of 2-9 in his three overs, and the game was up for Sonning Common when Nicola Lee picked up her maiden Mahas wickets during a 3.4-over spell which ended with 2-14, including the final wicket of Duncan Mee.

PEPPARD STOKE ROW UNICORNS were outplayed by a strong CHILTERN line-up as they slipped to a six-wicket defeat on Sunday.

Peppard began slowly but steadily as captain Fergus Nutt and Hamish Scott put on 26 for the opening wicket, the latter eventually falling for 14.

The middle order were blown away by some fine bowling as the hosts slipped to 61-4, only for Nutt and Rich Ashton to put on 53 for the fifth wicket. Nutt eventually edged behind for a well-crafted and patient 72, leaving Peppard on 114-5 after 24 overs.

Tom Wright helped up the scoring rate with a spritely 23 and Ashton manipulated the ball into unusual areas for an unbeaten 61 but the Unicorns’ total of 178-8 in 35 overs appeared slightly under-par at the interval. That proved to be the case as despite a pacey opening burst from David Williams, the away side batted well to race to 62-0 after 14 overs.

The introduction of the left-arm spin of Chris Humphreys, who returned figures of 2-23 allowed the Unicorns to start a fightback. Scott came back into the attack to pick up a wicket while there was also one for Asquith, smartly stumped by Wright, but Chiltern eventually reached their target with more than six overs to spare.