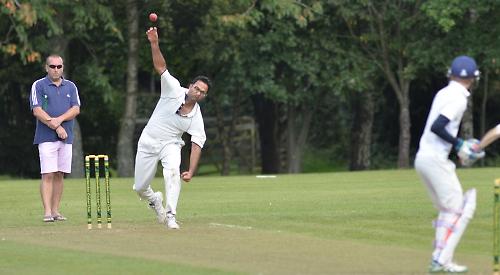 MATT Hopper signed off in style as PEPPARD STOKE ROW snatched the Premier Division runners-up spot with a 118-run victory against BERKSHIRE COUNTY SPORTS on a dramatic final day.

The South African all-rounder, who moves to Australia later this month, claimed figures of 4-31 and took an extraordinary catch at deep backward square leg.

Earlier, Peppard were indebted to Fergus Nutt, whose 85 left him with 616 runs at an average of 61.6 for the season. Sam Fooks, making 43, provided support, but with Saqib Hussain and Zaheer Ahmed returning figures of 4-41 and 3-48, respectively, the hosts were bowled out for what looked an under-par 223.

The result left Peppard waiting on the result of the Welford Park-West Reading game, and with the Wests unable to take the final Park wicket, Peppard secured the runner-up spot having won nine of their last 11 games.

Meanwhile, WOODCOTE defeated SANDHURST by nine wickets to end a difficult season, in which they have lost eight matches, on a high note and finish in sixth place.

Sandhurst won the toss and elected to bat but were soon in trouble as they lost their skipper, Adam Birch, to the bowling of Mark Pearson.

Wickets fell in quick succession as Pearson claimed four wickets while, at the other end, Paul Knox conceded just 10 runs in nine overs.

JP Brouard then joined the party and cleaned up the tail end with another four-wicket spell, conceding just 17 runs while youngster, Ed Batchelor, did well to show stubborn resistance and carry his bat through the innings for Sandhurst.

The Sandhurst innings had only lasted 27 overs and Woodcote showed no mercy and romped to victory in under 13 overs with Ryan Lennard and teenager, Ben Danks, remaining unbeaten at the end.

In Division 1, PEPPARD STOKE ROW 2nds began solidly after electing to bat at CHECKENDON and reached 52-1 in the 15th over.

However, the run out of opener Dom Hall for 19 precipitated a collapse as the three-pronged Checkendon spin attack picked up eight wickets between them.

Left-armer Alex Crawford led the way with 4-16 in 12 overs, while off-spinner Rama Adigantla finished with 3-23, helped by a particularly sharp catch from keeper Matt Heslop.

The visitors’ total of 107 was soon put into context by an opening partnership of 105 from John Acland-Hood, Checkendon’s leading runs-scorer in the league this year and stylish newcomer Sundir Kashetty.

Thirteen-year-old all-rounder Nicola Lee took one consolation wicket for Peppard as the hosts reached their target in 25 overs, to secure third spot in the division.

The visitors won the toss and elected to bat, declaring on 241-9. Opener Keerthi Prakash made 59 from 39 balls before he was caught by Jonny Russell off the bowling of Adam Ellis.

Tim Benham, in at four, top-scored with 74 runs, off 76 balls before falling off the bowling of Gary Niederheitmann, caught by Josh Monk, for 74.

Wickets fell quickly after that but Alex Davies at nine, frustrated Goring, hitting 38 and carrying his bat.

In reply, Goring started well with openers Ellis and Jonny Russell getting starts before being bowled for 38 and 18 runs, respectively. But it was Niederheitmann and Jim Ross, in at three and four, that took the game away from the visitors. They hit 81 and 41, respectively, before both being bowled by Alex Davies.

After losing George Taylor for seven it was left to Andy Ankerson with 29 and Ali Baxter, 13, to notch the winning runs.

Rob Dyer made two early breakthroughs to reduce the visitors to 18-2, and that became 40-3 when Dave Gordon was bowled by under-14 player Daniel Watts.

A 79-run fourth-wicket stand between captain Anthony Stott and Mohammed Arshad ended when under-14 player Owen Simmons had the former caught by Watts, but Arshad and Matt Crawcour continued to build momentum hitting 87 and 50, respectively. Knowl Hill ended up reaching 260-8 in their 45 overs.

In reply, Simmons with 79 and Asquith with 67 were the top scorers as Peppard reached 234-8.