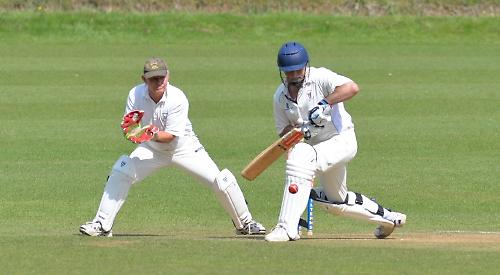 HARPSDEN travelled to table-toppers BINFIELD aiming to solidify their hold on third place in Division 1.

Having lost the toss and been told to field, Harpsden were aiming to build on a solid bowling performance from the previous week against Taplow and there was an air of anticipation as Wright and a returning Tom Hancock took the new ball.

Binfield openers Ennis and Morgan immediately found the going difficult as the humidity combined with a grassy, yet hard, deck combined to give the bowlers some significant carry and movement.

The breakthrough came early as Wright had Morgan bowled through the gate with a ball which jagged off the surface. Hancock then had Ennis caught behind as Binfield stuttered to 18-2.

Wright then had to withdraw himself from the attack owing to a side strain and Birkett was introduced to the attack, the change soon proving fruitful for the visitors as he had Carson bowled in his opening over.

Lee and skipper Staves then mounted the beginnings of a fightback before Lee was run out by Eslick for a quickfire 23.

Hancock then had the Binfield skipper caught behind for 11 as Binfield saw their top five depart with fewer than 80 runs on the board.

Franklin then chipped in with the wickets of Andrews and Reid as debutant Guy Leslie claimed his first Harpsden wicket with a huge inswinger, cleaning up Higginson for a duck.

With the Binfield innings floundering it was up to Hayman to shepherd the tail to a respectable score. He top-scored with 33 but his partner, Warren, however, fell to Heath for 10 and innings ended at 142 from 38 overs.

Andrews took the new ball for Binfield and picked up a double of Heath and Eslick within the first five overs. The pair were followed shortly by Stevens, caught at gully off the bowling of Hayman.

Franklin joined opener Imlay at the crease at 12-3 and the pair batted watchfully until Hayman had Franklin leg before for 14.

Imlay was now playing the anchor role for the innings, leaving the ball well, as Hancock began to accumulate runs at the other end. The pair made it to 90-4 by the time Hancock was dismissed for 19, walking past one from bowler Goddard.

Goddard then picked up the wickets of Bevan and Imlay, who made 47, in quick succession. Wicketkeeper Ward batted with a maturity beyond his years as he guided Harpsden to within 10 of the required total before Wright was well caught behind, becoming Goddard’s fifth victim.

Birkett joined Ward in the middle and the pair saw Harpsden home with one wicket to spare.

In Division 2, HURLEY did well to get 11 players on the field in the faint hope they might close the gap on fourth place. But fielding a young, inexperienced side told as TAPLOW 2nds outclassed the visiting crèche.

Taplow chose to bat first and Nick Malik plundered eight boundaries on his way to 57, though his expansive style saw him dropped in the deep on 33.

Imran Arshad removed both openers, but not before 84 was added for the opening stand in 16 overs. Joe Heaton briefly threatened with 17 runs before Joe Graham had him well caught at extra cover by brother Henry who snaffled the high catch.

But it was skipper Andy Mills’s 95 runs which swung the match away from Hurley. Taplow’s punishing run rate allowed an early declaration after 46 overs on 285-7, with the last 100 coming in 13 overs.

In reply, Hurley’s Mike Walton was bowled for five off Ali Hill while Imran Arshad had made 39 when his free-hitting was cut short in controversial style. Convinced he had hit the ball into the ground before it reached extra cover, the umpires conversed and ruled it a fair catch.

Hurley, now 48-2, saw Phil Ridgeway at the crease driving fluidly to his half-century and, alongside Varun Sharma, who made 20, added 47 in nine overs to light a fire under the visitors’ reply. Sharma edged to slip and James Calliss’s brave resistance ended with Hurley 117-4.

Ridgeway fell to an excellent catch by Mills while Henry Graham looked comfortable caressing the ball but was left stranded when Hurley’s young tail disappeared, losing seven wickets for 24 runs as Farhad Abbas finished with five wickets for 22 runs.

In Division 3, HARPSDEN 2nds beat rivals BRAYWOOD 2nds in a thrilling game which saw nearly 450 runs and 15 wickets in the day.

Harpsden skipper Burgess won the toss and elected to bat but his side slumped to 18-3 with the top order failing once again.

Toby Stevens from the off set out to punish anything off-length while Matt Hand nudged singles, giving the strike to Stevens at every opportunity. Stevens was eventually out for 88 which saw Burgess come to the crease at 143-4. He and Hand put together a useful partnership before Burgess was caught for 43 off the penultimate ball. Hand carried his bat for his 79 not out enabling Harpsden to post a competitive score of 236-5.

Braywood’s openers went after the spinning pair of Watson-Smyth and Shazad Gulfraz but the former managed to grab two key wickets with the old ball with both batsmen being trapped on the crease and given out leg before.

But Braywood kept rattling along and at 105-2 the visitors were in control. However, the return of Watson-Smyth saw the game change, bowling a devastating spell to stun the visitors. The over before drinks he removed Niramdeen for 63 and afterwards the youngster dismantled the middle order leaving Braywood wobbling at 137-7.

But they counter-attacked with West and Hussain putting on a 50-run partnership before Stevens removed West and two balls later Bennett. Rod Birkett claimed the final wicket of Younis.

In Division 4, HURLEY 2nds faced KNOTTY GREEN raced to an opening partnership of 119 in the 23rd over.

A switch to spin then paid dividends as Haines bowled Nick Scott for 45 with a quicker ball in his first over.

But Loki Patel hit his way to 79 before falling to a yorker from Tim Golabek while Hitesh Parekh added 26 runs in four overs before Haines trapped him leg before. Ian Rundle and Jack Patel put on 54 before Liam Cole got his first senior wicket having Patel caught behind by father Mike with a faint bottom edge. Haines had Colin Blunden stumped advancing down the track for six and then removed Rundle caught at deep cover by Ajmal Ali to bring the declaration at 268-6.

Knotty Green started with the old ball and spin. Hurley fell to 15-3 in six overs as Pat Hinnell sliced to backward point for nought and Abdullah Ali slapped a full toss to mid-on for three. Ajmal Ali smashed his first ball for six but then top-edged a full toss to slip for seven.

Josh and Mike Cole added 83 in 20 overs but then Josh retired suffering from cramp. He returned later with a runner before Mike was out leg before for 82 leaving Josh and Howard Mansell to secure maximum batting points at 203-8.