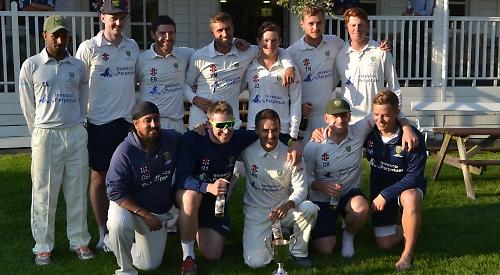 HENLEY wrapped-up the 2017 season with a convincing win against Slough, who fell 160 runs short in a run chase which did little to worry the newly-crowned double-champions.

Batting first, Henley amassed an imposing 315, with Richard Morris hitting 82 runs and Euan Woods 56 being particularly impressive, whilst the rest of the Henley order chipped in with valuable contributions on the way.

In reply, Tom Nugent, this season’s leading wicket-taker in the league with 40 scalps, was simply too good, taking the first four wickets, before Singh and Brock picked up two apiece and a David Barnes run-out finished off a 10-man batting line-up with overseas player Ahmed injured from his bowling efforts.

The win confirmed Henley’s position as Home Counties Premier League Division 1 champions, adding to their T20 Trophy earlier in the year and repeating the double achieved back in 2014. Although a hugely successful season, there has been a sense throughout that this group of players has a lot more to give over the next few seasons. With skipper Roberts eager to challenge for both the National T20 and 50-over competitions, this season may just be a stepping stone for bigger things to come.

Having selected 19 players over the course of the campaign, there is strength in depth there to ensure not just the first XI but also the second XI continue to compete in their respective strong leagues. After a convincing win against Gerrards Cross on Saturday, the second XI consolidated their position in Division 1 of the Thames Valley Cricket League with a strong sixth-placed finish.

Whist having gained a much deserved promotion, the third XI will be keen to progress again next year. There is still much to work on however, with the fourth XI requiring rebuilding and recruitment needed to bolster the club’s selection base to cover for the public school cohort, which are only available for half the season.

Nonetheless, club coach Stewart Davison and Roberts have much to be pleased about, with the latter being quick to praise the work of Henley’s charismatic coach and the committee.

Roberts said: “Stew has been fantastic this season, creating training environments for us over the last 18 months which have had a direct impact on how we are playing and performing.

“Hopefully we can keep hold of him for the next 10 years. The committee have also worked tirelessly throughout, who volunteer their time to make the cricket club a better place both on and off the field – we are very lucky indeed.

“The players themselves have so much to be proud of. The way we have played together in the first XI, with consistent attitude and energy regardless of the opposition and injuries, has been a true reflection of the kind of people at the cricket club at the moment. It makes my life as captain very easy indeed.”

Roberts, having amassed 793 runs at an average of 52.87 per innings, has lead from the front with the bat, whilst also managing to extract much of the team’s potential.

However, quick to move forward, it is clear that this season’s results are not what will define the club going forward.

Roberts said: “I think we are doing a lot right at the cricket club, and we’ve worked hard at just being good players and good lads week-in, week-out, allowing the results to take care of themselves.

“The most important results really are the seconds staying up and the thirds getting promoted. They have both been exceptional, especially during the second-half of the season and have been lead brilliantly by Charlie Homewood and Nathan Hopkins.

“However, we all have plenty of work to do over the next 12 months and after a rest during September, we’ll be back to it before pre-season gets back underway in January.”

Henley’s first XI has been the epitome of consistency. With the likes of Morris, Woods, Rowe, new-recruit Hussain and Davies performing with the bat, and Nugent, the evergreen Afridi and Singh proving too good with the ball on a number of occasions. The team has a formidable spine.

Bring the captain and coach into this mix, along with invaluable core members such as Ashraf, Barnes and Brock and talents such as Oldershaw, Legg and Jacobsen, the future looks extremely bright for the green and gold of Henley. Roll on 2018.