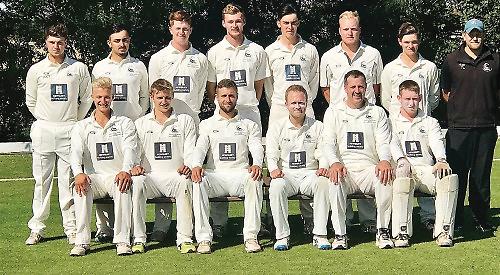 HENLEY Cricket Club have every reason to be proud of the role they played in the most successful season in the history of Berkshire county cricket, writes Dave Wright.

Jack Davies, Richard Morris, Euan Woods, Stewart Davison and Tom Nugent were all in the team that defeated Lincolnshire to win the Unicorns Championship play-off against Lincolnshire at Banbury last week.

Club colleague Waqas Hussain was not available for this four-day game, but he had played the previous week when they won the Unicorns Trophy at Wormsley, also against Lincs.

Henley also provided the man-of-the-match award in the four-day competition for the second successive year.

Twelve months ago, Euan Woods was the county’s hero when coming to their rescue after a shaky start with a tremendous innings of 142 not out.

The all-rounder staked a claim for a repeat at Banbury when making 97 in Berkshire’s first innings total of 215, but the MCCA’s prestigious individual award went to Hussain’s replacement Davies for his outstanding unbeaten knock of 127 as Berkshire won the game by six wickets.

The 17-year-old played in Berkshire’s early-season one-day games, but his commitments with Middlesex 2nds and Wellington College prevented him playing in any of the championship games.

Middlesex, however, allowed the left-handed batsman to play last week and he showed what an outstanding player he has developed into. Berkshire skipper James Morris said: “We hadn’t seen him for several weeks, but then he comes back into the team and produces an innings like that — just incredible.” He and Andy Rishton, who scored 76 not out, put on 156 to see Berkshire safely across the line at 291-4 and into the minor counties cricket record books. Morris described their partnership as “sensational” and among the best he had ever seen from two Berkshire players.

Henley’s Harry Jordan was Berkshire’s 12th man at Banbury, while Davison also leads the team through their pre-match warm-ups and their fitness has undoubtedly contributed to their success.

⚫ Ralph Dellor, a director and life member at Berkshire passed away suddenly at the age of 69 on Friday after a short illness.

He was a highly respected cricket coach, presenter, author and commentator.

Adam Mountford, the producer of the BBC’s Test Match Special, said: “He had an ageless voice and incredible enthusiasm for cricket,” while former England Women’s captain Charlotte Edwards described him as “a true professional and always a pleasure to work with.”

Ralph had been connected to Berkshire since 1982, initially as a coach, but later was heavily involved in the restructuring of cricket in the county in 1994, helping them to become one of the leading and most successful minor counties in the country.

His son, Tim, is a sports presenter on BBC Berkshire, works for Radio 5 live and is the Henley Standard’s Reading FC columnist.