Clifton top scores as side maintain their winning run 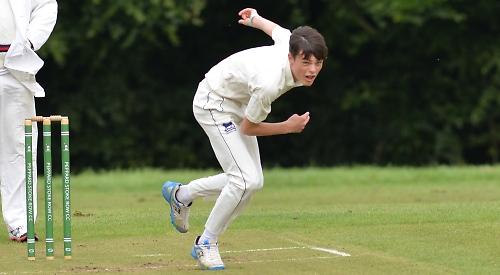 The Unicorns lost Fergus Nutt for a rare early failure early on, but Alfie Clifton (81) and Scott Harris (46) redressed the balance to put the hosts in control.

Tom Wright added an unbeaten 72 as Peppard Stoke Row totalled 233-6 in their 40 overs. Harris and Dion Sampson bowled potent spells without success at the start of the reply, but the introduction of Matt Kimber turned the game on its head. The experienced left-arm spinner took 4-47 in his eight overs to effectively kill the game.

Chris Humphreys, Josh Perkins, Olly Nicholson, Max Baker-Smith and Nutt also picked up a wicket apiece as the visitors were knocked over for 155.

Chris Humphreys moved to 49 wickets for the season as PEPPARD STOKE ROW UNICORNS recorded a 22nd win of the season with a six-wicket-success against SONNING on Sunday.

Captain Hamish Scott bowled a good ball to knock over the dangerous Will Ward with the fourth ball of the game, and despite Jacob Fitton’s 81, the visitors were held to 164 all out. Humphreys (4-13) was the pick of the attack while Satheech Elaganathan (3-33) also impressed in a tidy seven-over spell, and Max Baker-Smith produced a gem with his off breaks to account for Bill Travers.

The Unicorns lost Legg early on but Fergus Nutt (33) and his uncle Brett Everett (54) redressed the balance in favour of the home side.

After Nutt received a peach from Fitton, Richard Ashton made a brisk 24 before holing out at deep backward square leg, but skipper Scott played an innings of maturity belying his 19 years in taking the hosts to victory.

Chris Lee rolled back the years and showed he is still very much a medium-pacer to be contended with as PEPPAPRD STOKE ROW MAHARAJAH’S game with the WEEKENDERS was abandoned due to rain.

In reply, Allan May (30) and Owen Ravden (30 not out) gave the hosts a solid start, but when the rain fell forcing an abandonment Peppard Stoke Row had slipped to 91-5 after 20.3 overs.