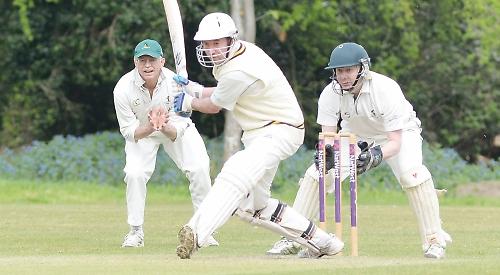 PEPPARD STOKE ROW UNICORNS continued their impressive season as a series of personal milestones was hit in an eight-wicket win at BINFIELD on Saturday.

The visitors made an early breakthrough when Mikey Allan-Canty was snared at first slip by Asquith off the bowling of U16 Alfie Burnett, but Colin Canty and John Humphrey rebuilt the innings.

The latter was caught by Chris Humphreys for 26, leg spinner Josh Perkins the bowler, and Humphreys then took his 50th Peppard Stoke Row wicket of a phenomenal summer when he bowled Tim Vines for two.

The Bath University student also took 26 wickets for Oxford in the Home Counties Premier League, eight for Oxfordshire 2nds and a handful for Bath back in April as he looks destined to fall just shy of 100 in all cricket for the summer.

Canty has scored more than 14,000 runs in his career – spiralling more than 45 years – at an average of 32.68. It was somewhat fitting, therefore, that he received a perfect Yorker from Scott Harris to be dismissed for 32.

That proved to be the case as Fergus Nutt made his way to 18, passing 2,000 runs for the club in a tremendous summer, only to be bowled by a peach from Berkshire Ladies bowler Amelia Humphrey two balls later.

While 20-year-old Nutt has proved a magnificent apprentice, it was his proverbial master Richard Ashton who sadly made something of a mockery of the game, blasting 104 not out from just 55 balls to see the Unicorns to victory in just 21.1 overs.

A remarkable spell from Satheech Elaganathan rescued PEPPARD STOKE ROW UNICORNS from almost certain defeat as they ended up winning a thriller by 14 runs against ROYAL CHALLENGERS on Sunday.

Berkshire Over 60s star Don Townsin led the way for the Unicorns with 48, and aided by a classy 73 from Fergus Nutt, the home side were able to post 172-7, Scott Harris making 29 towards the end of the innings.

Royal Challengers raced to 62-0 from just nine overs in reply, before Chris Humphreys (1-6 off seven overs) stifled the run rate.

However, the visitors were still able to reach 130-3 with nine overs remaining and seemingly well set to cruise to victory. That did not take into account the abilities of Elaganathan (5-19) and Harry Jordan (3-37), though, and aided by the fine catching of David Williams and a brace of stumpings from U16 star Marcus Laing, the away side were knocked over for 158.

The Berkshire League’s all-time top run-scorer smashed 100 of the first 128 scored by the home side, who eventually ended their 35 overs on 161-7 with Gary Legg making 25 not out as he shepherded the middle and lower order youngsters.

In reply, U13 player Ed Handley bowled an outstanding seven overs and U12 James Watts bagged 2-26 off 12.

With the rate rising Watts (1-15 off one) was able to burgle the wicket of Ollie Carrier after being hit for two sixes which had to be returned from the nearby Rising Sun, but the Maharajas were able to hang on for their ninth victory of the season – a record for the side.