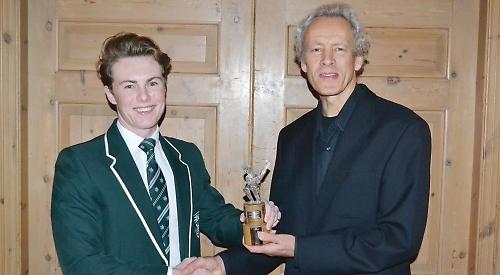 A BATSMAN who plays his cricket for Peppard Stoke Row has retained the Henley Standard Best of the Week award.

Fergus Nutt, who lives in Sonning Common, picked up the John Searby Trophy at a dinner held at the Red Lion Hotel in Henley on Thursday last week.

The Best of the Week competition runs throughout the season and records the number of times a batsman scores more than 50 runs or a bowler takes four or more wickets in weekend matches.

Nutt, who is studying sports science at Swansea University, comfortably won this year’s award with 16 batting entries, five of which were centuries, with his highest score being 172 not out for Peppard Stoke Row Unicorns in their Sunday match against Fleet Street Strollers in July. Last year Nutt recorded 19 entries.

Nutt had 38 innings this year scoring 2,074 runs in all and was not out 10 times. He made good use of the boundary with 1,120 of his runs coming off 32 sixes and 232 fours. He was presented with his award by Tony Searby, son of the late John Searby who the trophy is named after, at last week’s dinner which was attended by several former winners. A change in the competitions rules helped this year’s Best of the Week entries rise by 21 per cent on last year. In previous years bowlers were included in Best of the Week having taken five wickets or more but this year it was changed to four wickets or more in a move to make it fairer on bowlers. This resulted in 198 bowling entries as opposed to 78 last year.

In all there were 600 batting and bowling entries compared to 496 last year. There were 402 batting entries, including 64 centuries.

The best individual performances of the season saw Henley Cricket Club’s Richard Morris hit 205 runs for Berkshire against Wales Minor Counties while Manpreet Singh hit 191 not out for Checkendon against Regals.

With the ball M Smith of Wargrave 2nds returned the season best fixtures of 7-11 against Slough. Five other players also recorded seven wicket hauls during the season.