Willow copse that provides bats for cricketers on sub-continent 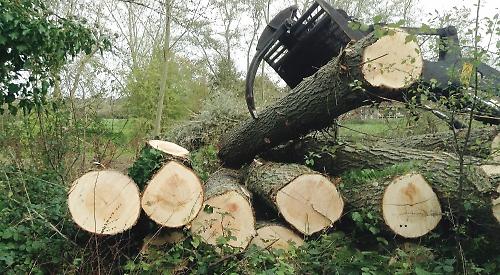 WHEN a group of trees in a field off Mill Road, Shiplake, was chopped down recently, it might have worried passers-by or residents that perhaps this was to make way for new housing.

But environmentalists can rest easy as the wood is actually going to make cricket bats for use in the Indian sub-continent.

The willow trees were grown on land owned by Shiplake Farm by J S Wright & Sons, a cricket bat maker based near Chelmsford in Essex.

The company, which was founded by Jessie Wright in 1894 and is now run by his 78-year-old grandson Nicholas, specialises in English willow bats.

It uses salix alba caerulea, a white willow ideal for the purpose, and cuts the wood into shape.

Nicholas says: “We’ve been taking a crop from that site in Lower Shiplake for many years. Those trees were planted specifically for harvest into cricket bats and were cut down because they are mature.

“They come to our workshop in Great Leighs where they are cut into 28in lengths, then split with a hydraulic laser and sawn into rough cricket bat shapes, which we call a blank. These are then exported to India and Pakistan to be made into the finished version and then you’ll see them with all different brand names.”

Nicholas, who still works five days a week despite his age, says the bats should be at least of county cricket standard, if not higher. “It depends on the grading of the willow,” he says. “Traditionally the bats from Lower Shiplake come out rather well.”

Stephen Doble, whose family has owned the farm for more than a century, says: “They’ve used the land here for cricket bats for as long as my father Brian can remember and he’s 70.

“It’s flat land which would be swamped otherwise so it’s a good practical use for it because we can’t use it for anything else.

The area will now be replanted and the new willows left to grow for about another 20 years before they are harvested.

It’s nice to think that a little piece of Shiplake is helping to produce the next Sachin Tendulkar or Younis Khan.