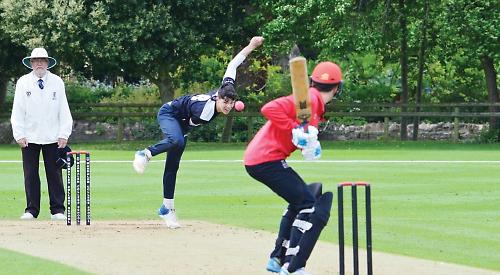 A STUDENT from a Sonning school has been selected for the Middlesex Elite Player Group.

Reading Blue Coat School Sixth Form cricketer James Rogers started introductory training with Middlesex last season, and was selected for two games for the county’s U19s towards the end of the summer, but was only recently selected for the Elite Player Group.

Rogers, 17, has played for Berkshire in his age group since the U11s, has had a season with the Datchet Cricket Club 1st XI, and has played for Blue Coat since Year 7. He is a seam bowler and bats at number three for the school – but “somewhere in the lower order” for his other teams.

According to Blue Coat first team cricket coach Phil Davies: “James is a hugely talented individual with all of the assets to make it as a professional cricketer. His self-determination has allowed him to make huge improvements in his game and his skill with the bat and ball and his cricket brain will be integral for the 1st XI this season and in his career with Middlesex.”

Rogers, who lives in Kidmore End, is the third Rogers brother to attend the Sonning School, is Blue Coat’s deputy head boy and has to juggle prefect duties and a very busy cricket schedule with his A-Level studies. He hopes to study sport and exercise medical sciences at Exeter – or sport science at Loughborough or Leeds – but, before that, will take a gap year to focus on his cricket. Three months of the year will be spent participating in a Gap Year programme at the prestigious Darren Lehmann Cricket Academy in Australia, and the remainder of the time will involve training and playing in the UK.

Rogers is already lucky enough to have played or trained with a number of top cricketers, but his personal cricket hero is Lancashire and England’s James Anderson “because his ability to swing the ball makes him one of the best bowlers in the world.”

Lockdown drama holds a mirror up to our times