The day Ray bowled out opposition on his own 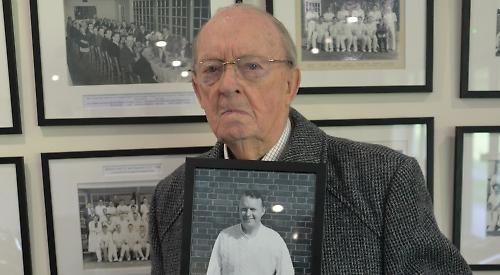 AFTER England’s heavy defeat in the first Ashes Test in Australia this week, what would the team give for a performance like that of Ray Hughes 64 years ago?

Ray conceded just seven runs in the opposition’s total of 27 and now to mark his achievement he has been honoured by the club with a photograph on the wall of its pavilion in The Hamlet, Gallowstree Common.

The 89-year-old, who lives in Sedgefield Close, Sonning Common, can still remember that match.

“It was a mix of wickets — bowled, stumped, LBW and caught,” he says.

“For one I remember the batsman came out of his crease towards me and the wicket-keeper pointed his arm out to the off-side.

“I bowled it wider and he took off the bails. Kidmore End always had a good team with excellent fielders.”

Ray grew up in Pontypridd and went on to train as a teacher at St Mary’s University in Twickenham, where he won a place after telling the interviewer he was stalwart of his school’s first XI.

After completing two years of National Service with the Royal Artillery, where he captained his regimental side, he went to live and work in Reading. Ray taught at St James’s All Age School in Reading for five years until 1953 when he was married and moved to Kidmore End and began working at the Sonning Common All Age School.

He and his wife Joan had three children, Graham, Michael and Jane.

He was asked to play for the village cricket team after someone heard he had been playing for Reading Cricket Club before moving. Ray went on to be a founder teacher at Chiltern Edge School in Sonning Common in 1958 before moving to St Anne’s Roman Catholic Primary School in Caversham, in 1960.

He became deputy head in 1963 and stayed there until his retirement in December 1992.

During his time there he ran the cricket and football teams and in his last year in charge of the former, they won the Reading primary schools cricket league and cup double.

Ray played for Kidmore End for 20 years and took a total of 1,000 wickets for which he was presented with a special trophy.

Club treasurer Alan Pigden, who played with Ray, says: “In my view his picture should have been put up a long time ago as I don’t think anyone else will come close to getting 10 for 7.”

My congratulations to Ray and happy birthday to him for Sunday, when he will turn 90.