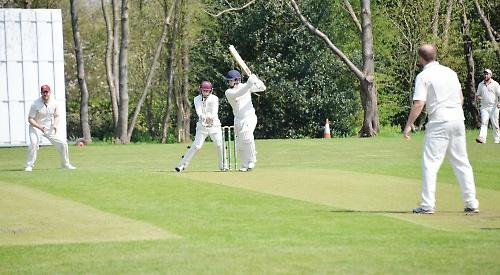 In their first game of the season Peppard slipped to 11-3 in the face of some tidy bowling from Ben Barker and Mark Tennant.

However, Oxford-bound Fergus Nutt (51 runs, retired) and Ashton (101 runs, retired) helped stabilise the innings, and with Sam Fooks (17 runs), Michael Chard (14 runs) and Josh Perkins (15 runs) adding in excess of 50 including extras from eight, nine and 10, the hosts were dismissed for a respectable 233.

In reply, bowlers Dan Hayden, who took one wicket for seven runs from his five overs, and Sam Fooks, with two wickets for 19 runs, had the Narks in early trouble, before Alfie Burnett and debutant Jamie Sharrock also picked up a wicket apiece.

As the visitors continued to struggle, young leg spinner Josh Perkins pitched in with two wickets at 17 runs. His first victim was John White, who was bowled through the gate while South African Dion Sampson had Dave Bushnell smartly stumped by 17-year-old Marcus Laing.

Victory for Peppard was completed when Olly Nicholson picked up two wickets for 14 runs in a tidy spell at the death.

He then bowled the ball of the day, an in-swinging delivery pitching on leg nipping off the seam to take the top of Tennant’s off-stump as Wooburn were bowled out for 134.

Speaking after the game, Ashton said: “It was a tough start but we have a long batting line-up and the runs Fooksy, Chardy and JP made were invaluable. It changed the momentum of the game.

“Daniel bowling as he did up top was a major bonus and it was great for Jamie to pick up his first wickets. We have lost a number of players, but I have faith in what we still have.”

FERGUS Nutt picked up his second half-century of the weekend as PEPPARD STOKE ROW UNICORNS beat WOODCOTE by 88 runs on Sunday.

Jonny Clark, returning figures of two wickets for 30 runs, was the pick of the Woodcote attack, including a delivery which pitched on off before removing Wright’s leg bail as a particularly impressive contribution.

Woodcote started well as Ryan Lennard and JP Brouard dealt with the left-arm spin of Humphreys effectively, the breakthrough coming when the former nicked a Satheech Elaganathan delivery to slip.

The same bowler cut one down the slope to account for the dangerous Paul Knox before both Brouard and Clark showed their class.

The duo eventually both retired at 50 before the Unicorns’ young leg-spinners Josh Perkins and Sam Kimber got to work.

Perkins was able to bowl Adam Burgess before his best friend Kimber had Mike Stroker caught and bowled and then enticed an edge to first slip off Patrick Baker, the batsman well caught by Harris, as Woodcote ended on 143-5.