Ashby and Faroqi mop up tail as Kidmore triumph 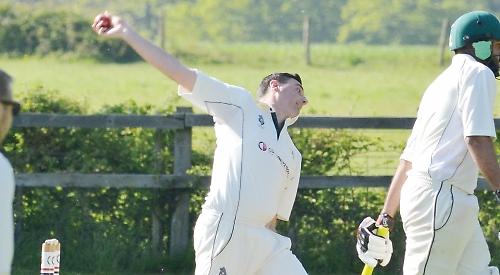 HENLEY 2nds got their Division 1 campaign off to a winning start as they triumphed by two wickets at FALKLAND on Saturday.

After having won the toss and electing to bowl, Simon Wheeler’s opening spell kept the Falkland openers quiet before Zac Jones made the first breakthrough, collecting a return catch.

Falkland’s Will Langmead batted with intent throughout, compiling 108, and Henley would have rued dropping the opener twice early on, as he provided the only real resistance after Bruce Martin (38) had run past one off the bowling of Ashraf.

From a strong position at 183-2, Falkland started to get bogged down by the impressive spin combination of Ashraf and Kenworthy, with the former bowling through a painful shoulder injury to collect figures of 2-48, and the latter producing a miserly display in the face of a punishingly short leg-side boundary to return with 1-43.

Once Nick Johnson (2-48) had accounted for Langmead, the rest of Falklands’s batting collapsed quickly, with Johnson and Wheeler (3-15) combining to reduce Falkland to 216 all out.

In their reply, early dismissals for Ashraf and Legg meant that Henley were struggling at 22-2, but a patient innings from Chris Ellison allowed Oldershaw (24), Hopkins (36) and Jones (21) to play the aggressors, with Henley seemingly cruising at 161-4.

A mini wobble ensued with both Homewood and Gill falling cheaply, and it was left to Ellison and Johnson to steer Henley home. Ellison eventually departed with the scores level for a match-winning 90, but Johnson completed the task the following over to wrap up victory.

KIDMORE END ran out 134-run winners in their opening Division 2A clash of the season against MARLOW at Gallowstree Common.

After just a few overs Kidmore End, batting first, were 18-2, having lost opener Burslem and keeper/batsman Leonard. However, despite these early wickets an explosive counter attacking third wicket partnership of 46 between Kidmore End league debutant Burningham and the youthful Easton (48) seized momentum back from Marlow.

It was only the 15th over when Burningham (20) was dismissed, yet the pair had put on 90 runs together in less than 10 overs.

There was a rapid cluster of wickets just before the drinks break as the slow bowling of Marlow halted the Kidmore onslaught. Mark Dozell was the pick of the bowlers sending down canny off spin bowling, was supported by Imran Nawaz.

Bodeker (25), who played some precisely placed shots and Ashby put on 37 together and Kidmore had rallied to 154 for 4.

Momentum swung back in favour of Marlow when opening bowler Kirk Graham found himself on a hat-trick, reducing Kidmore End to 154-7. He nearly took his hat-trick as Frost was fortuitous to survive an lbw appeal first ball.

Frost and Ashby steadied the ship, with watchful and circumspect batting, interrupted by the occasional sumptuous Ashby drive. The pair took Kidmore to 180 before Ashby was stumped for 30. Faroqi (25) and Frost then continued the innings, as Faroqi unleashed some mighty blows before he was caught in the outfield with the score on 210 from less than 40 overs.

The last wicket pair of Jones and Frost nudged, scampered and scrapped until the 45th when they had managed to take the score to 238.

Marlow started well, scoring rapidly in the first few overs as the opening bowlers found the new ball difficult to control. However, Jones held his nerve and dismissed both opening batsmen in the first five overs despite Marlow reaching 30 in this time. His first wicket was a result of a short ball that the batsman could not control that was caught by Alex Crawford, who had to stare directly into the sun to hold onto the steepling catch.

His second wicket bowled the batsman who was cramped for room as he inside edged the ball on to his stumps.

Despite these early wickets Marlow kept attacking. A change in bowling helped to slow down the scoring and proved crucial in giving Kidmore End the upper hand for the rest of the game.

Reunited in tandem for the first time in more than two years, the Frost/Crawford bowling partnership went to work as they squeezed the batting side with consistent nagging accuracy.

Frost benefited on this occasion and took two wickets before he finished his eight over spell, thanks to good catches by keeper Leonard and Faroqi.

Crawford continued to stifle Marlow and this helped Sheldon take a wicket as soon as he came on to bowl, shortly after this Crawford was rewarded for his accuracy taking his first wicket and immediately afterwards his second.

Marlow’s middle order had collapsed losing six wickets for just nine runs, the score going from 46-2 to 55-8. Crawford took a third wicket, following a stunning one-handed slip catch by Burslem, before he finished his allotted overs with miserly figures of 10-7-15-3. Ashby and Faroqi mopped up the tail picking up a wicket each bowling Marlow out for 104.

HENLEY 3rds suffered a 163 run defeat away at NEWBURY in Division 4A.

Batting first Newbury were bowled out for 261 with Sean Taylor taking 3-34 and Chris Johnson and John Neville both taking two wickets each.

In reply Henley found scoring runs hard to come by as they were skittled out for 98 with Sam Ranger top scoring with 16.

In Division 5B WARGRAVE 2nds beat newly promoted SONNING 2nds by nine wickets largely due to a sublime bowling performance by John Rimmer.

Coming on first change, Rimmer bowled accurately, returning figures of 5.3 overs, six wickets for six runs. He was ably supported by Arul Appavoo who took 3-10 off three overs, resulting in Sonning being bowled out for just 52 after winning the toss and choosing to bat first. Wargrave took only eight overs to knock off the score with a loss of one wicket.

A solid team performance from KIDMORE END 2nds saw them beat hosts YATELEY 2nds by four wickets in Division 7A. Yateley elected to bat first and were soon on 14-1 before a second wicket stand of 40 saw them move on to 54 before a 36 run stand for the third wicket also pushed them near to 100.

Kidmore bowled well in the middle overs of the Yateley innings with Phoebe Graham on debut returning figures of 10-2-27-2, Sam Crawford also bowled two useful spells with figures on 10-2-36-3 and the effervescent Nish Rajmohan bowled a lovely spell of off spin with figures of 8-2-39-2 off which 20 of the runs came off his last over and the final over of the Yateley innings as they finished up on 178-8 from their 45 overs.

In reply Kidmore lost the early wicket of Callum Driscoll before Mark New and Stefan Gordon posted 44 for the second wicket before New was lbw to a ball which kept low for 23.

Gordon and Rajmohan then added a further 30 before Gordon was dismissed also lbw for 23. Rajmohan then took charge of the run chase as firstly with Tom Wilkinson they took the score to 115 and then with skipper Chris Pigden to 155-5 before both Rajmohan and Pigden were dismissed fairly quickly together leaving Kidmore on 160-6.

The two debutants Alex Rusjan and Graham got Kidmore over the line in a solid all round team performance.

WARGRAVE 3rds scored an impressive 229-3 from their 40 overs against BOYNE HILL 4ths with the top three of Huw Thomas (88), Kieran Lall (36) and Matthew Townson (64) all in the runs during this Division 8 encounter.

Boyne Hill struggled in reply with opening bowlers Charlie Moss (3-4), and 14-year-old Joe Warren (3-21) taking out the top of the order. Boyne Hill rallied well largely due to Umsr Imran’s 63, but were bowled out for 100 with evergreen Scott Walker cleaning up the tail, taking three wickets for eight runs.

Batting first the visitors were bowled out for 182 in an innings that saw 84 runs scored via extras. In reply Kidmore End eased to 183-5 to win the match in 38 overs.