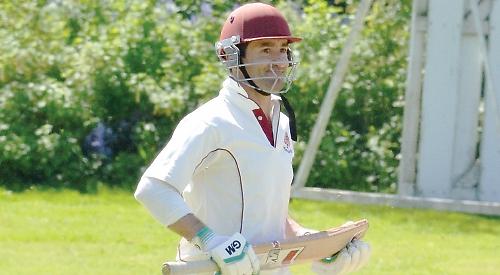 Dave Simoes’ solid 46 was the basis of Hurley’s below par 140 all out. With the middle order disappearing quickly to Danyal Mumtaz it was left to Phil Ridgeway and Jonathan Langlands to push the home side to 140 with a 10th wicket stand of 26, the second highest of the innings.

Hurley had started brightly with Simoes and Vik Bhagwani adding 42 in 12 overs before Bhagwani felt the urge to swing and was bowled by Ian Caskie.

Seven batsmen failed to make double figures as Hurley slipped in familiar style from 76-2 to 97-7. Langlands greeted his first ball with a sweet hit to long on for a boundary, but with the score on 140 and three overs to go and having just found the long off boundary, Ridgeway failed to clear the fielder a second time and the innings closed.

Holyport started their reply brightly through Alex Riley and Jan Gingie adding 27 in nine overs before an unwise run was attempted to Henry Graham at short cover.

The return of Naeem Akhtar then bowled Patel and had Riley edging to slip where Ridgeway pouched another fine catch.

Jonathan Langlands had Rasool skying to mid-off where Gul took the steepling catch. Holyport subsided to 86-8 as Akhtar generated impressive pace to clean up the stumps of three of his victims, and this after fearing he might not bowl this season.

Ali Thompson and Ian Caskie then added 38 before Vik Bhagwani took a stunning return catch to remove Caskie. Holyport needed 17 from the last pair from five overs. With Thompson still there and the reliable Tim Hayes, this looked certain before Thompson drove at mid-on and ran. Hayes sent him back, but too late as Jeff Dawson’s throw to keeper Simoes left the batter short.

HARPSDEN 2nds suffered an opening-day Division 1 defeat away at PINNER.

Skipper Mark Cooper lost a critical toss and Harpsden were put into bat on a wet track that was only going to get easier to bat on as the sun dried it out.

Opener Ollie Brown looked to take the attack to the Pinner bowlers but was beaten by some late in-swing from Aggarwal whilst Cooper succumbed to a ball from Lawrence that was angled in and nipped away and was caught behind.

This brought Ollie Heath and Sam Imlay together and in the main they looked comfortable despite the odd ball taking off from a good length. They put on 41 for the third wicket before Imlay drove a little early and was caught at extra cover by the Pinner captain Dan Langan.

Toby Stevens came in to join Heath and the two of them moved along well with Heath being particularly brutal on the bad ball. At 99-3 Harpsden were looking at what they felt would be a competitive total of around 150, but that was before both Stevens and Heath were defeated by deliveries that reared off a good length with Stevens being caught and bowled and Heath caught behind. A Harpsden collapse followed and they lost their last seven wickets for just 14 runs.

Despite leaving Pinner only 114 to win in 50 overs, Harpsden felt they had a chance of victory but they needed to make early in-roads. This they did in the second over as Rod Birkett trapped Ramachandran in front which brought Pinner’s star bat Hymers in to join Carter. These two struggled to get either Birkett or debutant Tom Dawson away as they bowled good areas. At 12-1 after 11 overs and only 20-1 after 16 overs, Harpsden felt they were exerting enough pressure to force Pinner into taking risks.

The initial required run rate of just over two an over had climbed to nearly three and the change bowlers of Heath and Shazad Gulfraz were also keeping the Pinner batsmen under pressure but a few looser overs and Pinner progressed to 51 in the 23rd over when Hymers went for a second run and was beaten by Birkett’s direct hit from wide mid-on.

This triggered a mini collapse as Birkett had Carter well caught by Imlay and then trapped Williams in front. This left Pinner at 53-4 — effectively 53-5 as one of the Pinner players had dislocated his shoulder when fielding.

However, it was at that point that Birkett was removed from the attack after bowling his second above waist full toss as he fell foul of the new law introduced this season — he finished with 3-7 off his 8.5 overs.

Cooper juggled his bowlers very well with Bhaskar Chikanna and Toby Stevens bowling particularly well and when Pinner fell to 102-7 all results remained possible but three big blows from Aggarwal and Pinner sneaked over the line.

HURLEY 2nds started their league campaign with a short journey up the A404 to LITTLE MARLOW 2nds.

A number of drop-outs had decimated what had looked like a strong line-up in midweek, forcing Hurley to field 10 men and boys. New captain Clive Williams lost the toss and Hurley were asked to bat first.

Openers Williams and Ali found runs hard to come by against some accurate seam bowling by Andy Findlay and the unpredictability of Danny Ishaq.

Eventually the pressure told in the seventh over with only 20 runs on the board when Ali tried to force the pace. His lofted drive off Findlay just failed to clear Thistlethwaite at mid-off. A further 10 runs were added before the introduction of Ged Holmes saw off Williams.

Danny Ishaq was brought back and picked up the wickets of Taylor and Matthew Williams. The last recognised batsman, Scott Taylor, joined Walton in the middle and took the attack to the bowlers with three boundaries in a partnership of 21. Once Taylor fell to Neil Lancum it was left to Walton to try and eke out as many as he could with the tail.

Another 19 runs were added by Walton but Alex Williams was not quick enough to beat the throw of Findlay as the innings ended after 38 overs on 76 all out.

The Little Marlow batsmen didn’t have things all their own way. Richard Tinsley played and missed on several occasions and could easily have fallen to Scott Taylor or Alex Williams. The breakthrough came in the fourth over, with the score on 10.

Nicky Marie went for a big heave across the line to Williams, losing his middle stump in the process. With Taylor bowling well at one end, Williams mixed up his youngsters at the other end. Hassan Gul bowled admirably, despite conceding 14 runs from his first over, mainly due to problems with his run-up; his next three overs only went for six, as he dropped his leg breaks on a good length.

Guy Thistlethwaite steadied things for the hosts and had got them to 45 when Taylor had him caught by his father Steve, running forward from second slip to take a difficult catch. Hamza Shazad and Tinsley saw their side home in the 20th over without further alarm.