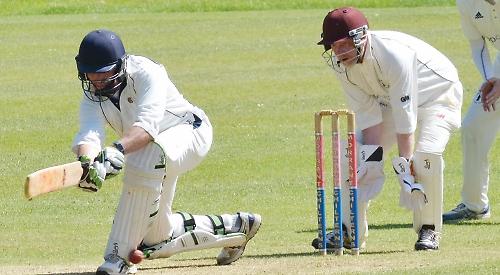 The visitors made a poor start at RAF Vine Lane as Andy Watts and Michael Chard fell early to leave them 13-2, and when Ashton and youngster Ben West fell, they were 63-4.

Harry Jordan (35) batted well to resurrect the innings and Olly Nicholson (27) – who hit his first ball for six – steadied the ship, but when that duo departed, Peppard Stoke Row were 109-6.

Teenager George Lee batted well before being run out and Riaan Ackerman struck a huge straight six, but it was a vital unbroken stand of 46 between Sam Fooks (38 not out) and Josh Perkins which helped the visitors reach 199-8 from their 52 overs.

In reply, Sampson — who planned to retire during the winter — removed both openers as Ashton took a couple of smart grabs at first slip, but with Surinder Singh blasting a quickfire 45, the hosts were in pole position as they reached 98-2 after 17 overs. What followed was an incredible implosion as Ruislip Victoria crashed to 125 all out, off spinner Sampson ending with 6-50 and Fooks with 3-17 as Chard capped a fine display behind the stumps with a brace of stumpings and a crucial catch to dismiss Ruislip’s key man Kashif Maan.

Elsewhere in the division HARPSDEN were held to a draw at CHALFONT ST GILES. Chalfont skipper Cross won the toss and elected to field, hoping to make use of the little moisture left on the wicket. His decision was vindicated early on as Winters found some movement off the seam to dismiss Eslick.

Scoring was slow early on as Birkett and Watson dug in through the early period and saw off the new ball. The pair batted well together until Birkett was caught at mid-off for a well made 40 off the bowling of Cross.

Watson was joined by Harpsden skipper Whittaker and the two began to up the scoring rate with a mixture of effective rotation of the strike and brutal treatment of the occasional loose ball. Watson passed his 50 before being caught behind off the bowling of Heaney.

Stevens arrived at the crease and played his role perfectly, manipulating the field and allowing the more expansive Whittaker to get on strike with regularity. By the time Whittaker was dismissed for a rapid 95 Harpsden appeared to be well on target for a formidable score, and some late hitting by Stevens (43 not out) and B Hancock (22 not out) saw Harpsden end up on an impressive 280-4 from their 52 overs. In reply Chalfont St Giles got off to a good start with openers Cross and Hardy making the most of some loose bowling from the Harpsden openers. This was short lived as T Hancock had Hardy caught behind for 12, and Wright snared Cross for the same amount.

Wright then bowled Plested to leave Chalfont struggling at 46-3. This brought together the pair of Heaney and Bauhohl who batted with discipline, punishing the loose balls moving the score along at a decent rate.

The pair put on 82 before Heaney was bowled by the returning T Hancock for 59. From here the Chalfont batsmen appeared to make the decision to bat for the draw and the Harpsden bowlers found themselves struggling to extract much life from the pitch in energy-sapping conditions.

Opener E Birkett returned and had N Lancaster strangled down the leg side, and a direct run out by Eslick saw the back of Plested, but in the end taking the full 10 wickets proved too much for the home side. S Lancaster batted well around Bauhohl (52 not out) to ensure Chalfont saw out the draw and see the spoils shared.