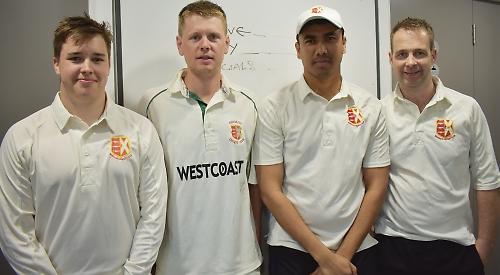 In Division 1 hosts HENLEY 2nds were on 170-4, with opener Zia Ashraf on 67 not out, at home to COOKHAM DEAN before their match was abandoned while in Division 2A hosts OMT were on 4-1 at home to KIDMORE END when rain stopped play.

WARGRAVE 1sts had a tough 20 overs watching the ball fly to all parts of the ground at HIGH WYCOMBE in their Division 2B clash. Former Northants cricketer Gavin Baker took a liking to the Wargrave bowling attack scoring 82 not out of the 154-1 posted by the hosts before the match was curtailed by rain.

At Nettlebed HENLEY 3rds had put on 132-5 in their Division 4A home clash with ROYAL ASCOT 2nds before the rain set in.

One of the two matches completed was played out at the Recreation Ground where WARGRAVE 2nds made quick work of bowling out PURLEY 2nds and chasing down the score to force an unlikely victory in Division 5B. Arul Appavoo with his medium fast, left arm swing bowling was the pick of the bowlers, taking out Purley’s top order with 4-15 from 10 overs. He was ably supported by Scott Morton, 3-18, Andrew Hattey, 2-12 and Martin Smith, 1-3, resulting in Purley being bowled out for 55 in just 25 overs.

Wargrave openers, Sam Bowers (42 not out) and Kieran Lall (13 not out) knocked off the runs in quick time to complete the game with a straight six from Bowers being a highlight.

At Gallowstree Common Mark New top scored with 51 as KIDMORE END 2nds put on 204-7 in their Division 7A clash with SULHAMSTEAD AND UFTON 2nds before the match was halted.

WARGRAVE 3rds scored 205-6 from 40 overs against BAGSHOT 3rds before the rain came and they abandoned this Division 8A clash. Charlie Moss (93) just missed out on what may have been his maiden century, and there were strong contributions from some of the junior players — the Warren brothers Sam (42) and Joe (21) and Tom Walker (22).