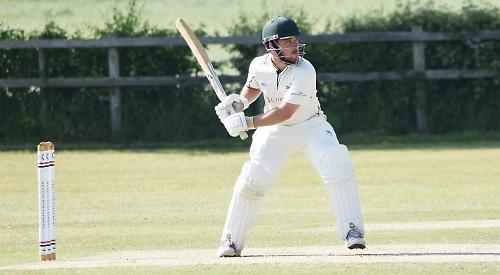 KIDMORE END batsman Zac Leonard missed out on setting a new club scoring record by 12 runs as he was dismissed for 204 in his side’s home win against WOODCOTE on Sunday.

Kidmore won the toss and chose to bat. Opener Leonard started quickly in the first over scoring two boundaries and looking comfortable while Jake Leach started in a similar fashion, getting off the mark with a huge six.

The opening stand had moved along to 50 quickly, aided by some good quick running and the lightning fast outfield at Gallowstree Common.

Leonard moved onto 50 off of just 44 balls with a clip through the leg side as had been a feature of his innings. The following over Leach hit a cover drive and reached his 50 with a punch down the ground. Soon after the opening stand of 156 was broken when Leach was bowled trying to sweep the new bowler Roberts.

Faroqi came and went in his usual attacking style but Leonard remained unfazed and continued in brisk fashion to his hundred off just 75 balls. Tom Wilkinson rebuilt a partnership of 128 with Leonard.

Leonard was very much the aggressor of this partnership and bought up his 150 off of only 111 balls, and then further kicked on and amassed his double hundred off of only 140 deliveries, however, he was later bowled for 204 aiming to break the Kidmore End club scoring record. His innings was one of both style and substance that included 32 fours and two sixes.

This left Woodcote the tall task of chasing 301 in their 35 overs. Their innings started strongly, with Brouard batting nicely ably supported by Anderson, the latter however was dismissed for 11 by a good bit of bowling by Frost trapping him in front of all three and being adjudged lbw.

Leonard was to feature again in the match through the fine catch to dismiss Banks off the bowling of Frost. The combination of Frost and Leach came together to dismiss Brouard with a sharp stumping and Woodcote were then struggling at 111-3. The partnership of Clark and Robertson rebuilt the innings and the former hit several lusty blows down the ground. However, he was dismissed by Nathan Ruegg, bowled, and this left Woodcote reeling.

Another sharp legside stumping by Leach dismissed Rakesh. Leonard came on to bowl at the end of the innings and picked up the key wicket of Robertson. He would go on to take a further two wickets, one bowled, and one stumped again by Leach. Frost and Leonard were the pick of the bowlers and both finished with three wickets apiece which aided Kidmore End in their victory by 70 runs.